U.S. demand is “pretty healthy from an inventory perspective,” said Brian Kessens, a portfolio manager at Tortoise, a firm that manages roughly US$8 billion in energy-related assets. While the delta variant bears watching, in the U.S. “to date, it hasn’t had any impact on mobility at all,” he said. 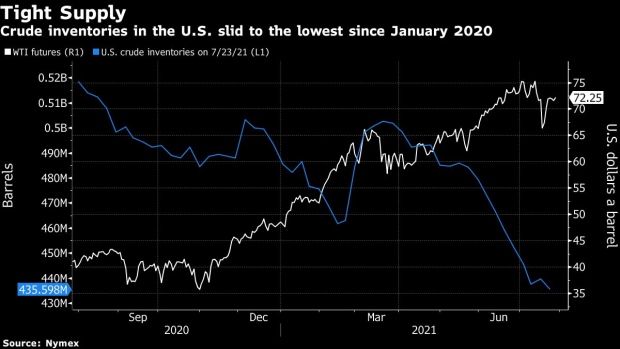 Global oil prices have rallied this year with an economic recovery underway following vaccine campaigns. However, the delta variant’s recent surge is posing a threat to the commodity’s rally -- and short-term demand -- as a rapidly rising case count has led many countries to impose restrictions.

“The oil market is just waiting for the moment to get the all-clear signal that the delta variant risk is just a blip on the overall outlook,” said Ed Moya, senior market analyst at Oanda Corp.

Deutsche Bank sees Brent prices at US$72 in the second half of this year, as speculative interest wanes but the market remains supported by deficits averaging 900,000 barrels per day through the rest of the year, said analyst Michael Hsueh in a recent note to clients.

The EIA data also showed jet fuel demand rising in the U.S., with the moving average climbing to about 1.5 million barrels a day, the highest since March 2020. Inventories at the nation’s largest storage hub in Cushing, Oklahoma, slid to the lowest level in more than a year.

Meanwhile, returns from converting crude into gasoline have surged in recent weeks from the U.S. to Asia, where they’ve hit the highest level since April 2019. However, the spread of the delta variant has presented a challenge to refiners ready to put the worst of the COVID-19 pandemic behind them. Processors want to cash in on better margins, but are wary that renewed demand weakness could lead to a surplus of fuels and sink profits again.