Futures in New York gained 1 per cent on Thursday as Venezuelan President Nicolas Maduro defied calls from the U.S. and other nations to cede control of the Latin American country that holds the world’s biggest crude reserves. The fortress-like U.S. embassy on a Caracas hilltop may become a flashpoint after Maduro’s order for American diplomats to evacuate was ignored.

A U.S. Energy Department report that showed the biggest increase in domestic crude stockpiles since November and record gasoline inventories was largely shrugged off by investors. 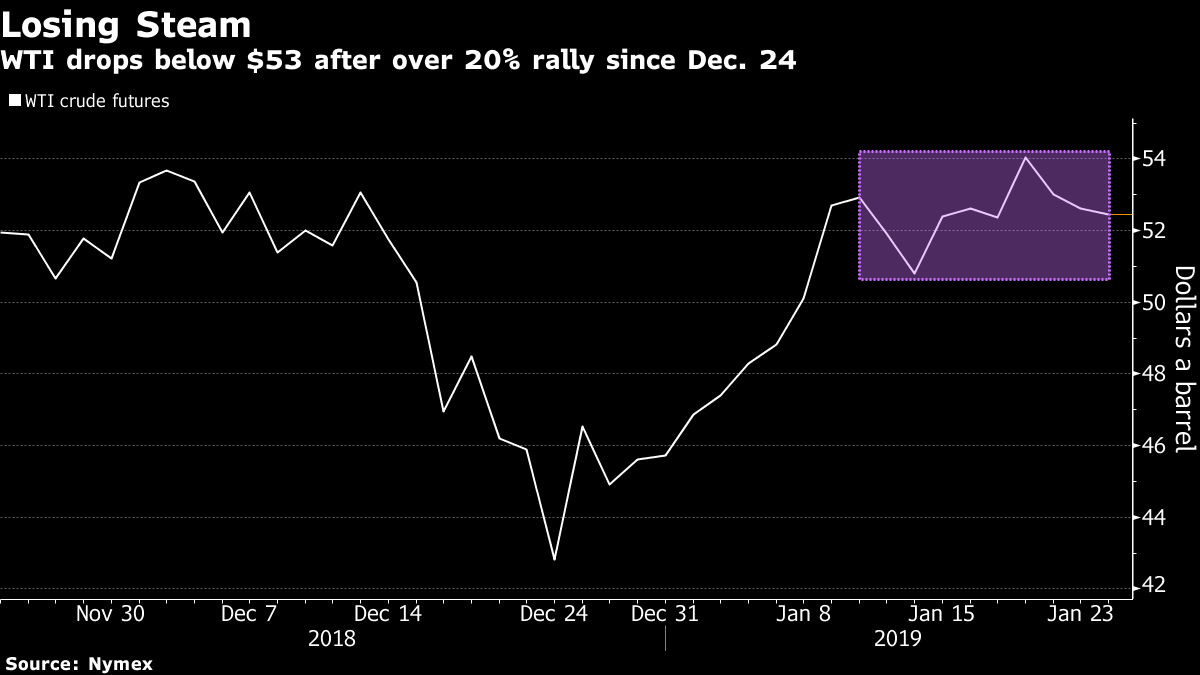 Crude markets had been off to their best start in 18 years on optimism about output cuts by Saudi Arabia, Russia and other top producers. That mood faltered in recent days as data showed rising production in the U.S. and weaker economic growth around the globe.

U.S. President Donald Trump was said to be considering new sanctions against Venezuela as Maduro faces one of the toughest yet challenges to his reign. Separately, commodity traders Mercuria Energy Group Ltd. and Glencore Plc said OPEC supply cuts had set the stage for rising prices.

Bullish sentiment could rein again if Trump follows through on a threat to expand sanctions against OPEC member Venezuela, forcing some Gulf Coast refiners to seek out new supplies. The administration added to pressure on Maduro’s regime on Wednesday by recognizing opposition leader Juan Guaido as the country’s interim president.

“With the U.S. now clearly taking sides with the opposition, changes might be in the making,” said Tamas Varga, an analyst at PVM Oil Associates Ltd. in London. “This would deal a further blow to U.S. refiners that rely on whatever Venezuelan oil is still available and as such would be short-term bullish.”

West Texas Intermediate crude for March delivery added 51 cents to close at US$53.13 a barrel on the New York Mercantile Exchange. International benchmark Brent crude, which is less affected by Venezuela than the U.S. grade, slipped 5 cents to US$61.09 on the London-based ICE Futures Europe exchange and commanded a US$7.96 premium to WTI.

The Trump administration has drafted a slate of sanctions but hasn’t decided whether to deploy them, according to people familiar with the matter. Earlier this month, White House officials warned U.S. refiners and advised them to seek alternate sources of heavy crude. Some processors worried about restrictions experimented with alternatives last year before ultimately returning to Venezuelan crude.

Other oil-market news: Gasoline futures gained 0.1 per cent to US$1.3876 a gallon in New York trading. The global oil market looks  constructive this year, with oil stocks ready to decline in the second half, Glencore head of oil  Alex Beard told reporters at the World Economic Forum in Davos.  OPEC is retaking charge of the market after curbing production, which should help Brent rise as high as US$70 a barrel this year,  Marco Dunand, Mercuria’s chief executive officer, told the forum.