The best is yet to come for Canadian oil and gas stocks: Bison Interests' Young

Oil edged higher after OPEC and its partners left themselves room to quickly adjust output plans if the pandemic drastically changes the market.

West Texas Intermediate closed up 1.4 per cent after a volatile trading session on Thursday. Futures recovered from their morning plunge of 4.8 per cent after the producer group said it was keeping its meeting open to adjust plans on short notice if necessary. It’s an unusual step that underscores the uncertain outlook amid a resurgent pandemic.

Traders had widely expected OPEC+ to defer the 400,000 barrel a day supply increase with concern growing that the omicron coronavirus variant will hurt demand. Prices have plunged into a bear market in recent days, and as the group met, Germany announced strict coronavirus curbs, underscoring the risk to demand.

“The genius move was keeping this meeting open,” Amrita Sen, chief oil analyst at consultant Energy Aspects Ltd. said in a Bloomberg Television interview. “You will not be brave enough to sell against that.” 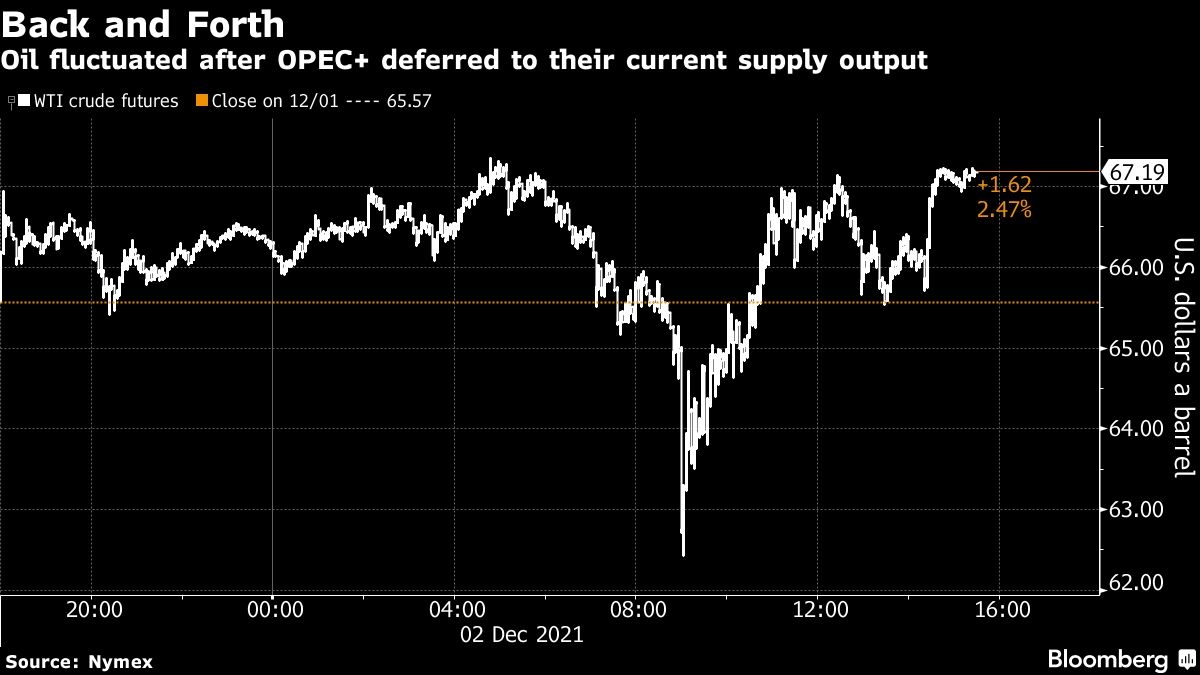 Oil has dropped more than 20 per cent since late October on a White House-led coordinated reserves release and, more recently, the new virus variant. An increasingly hawkish tone from the Federal Reserve is also weighing on the growth outlook for the U.S. economy. A major, as yet unanswered, question is whether existing virus drugs will work against omicron.

Still, there are those who think oil’s drop has been overdone. Goldman Sachs Group Inc. said prices are primed for gains as Thursday’s decision by OPEC+ to proceed with planned production increases won’t derail an “ongoing structural bull market.” Bank of America Corp. said it was sticking to its US$85-a-barrel forecast in 2022, with possible surges past US$100 if air travel rebounds.

The recent selloff in prices has stretched all the way along the futures curve. The key Brent Dec.-Red-Dec. spread, a gauge used by traders to bet on the health of the market, is at its weakest since February. Options markets have been roiled too, with volatility soaring to its highest since May last year.

Separately, negotiations around the revival of the Iran nuclear deal are ongoing. Officials from the country presented proposals for the process of sanctions removal, local media said, though there remains little sign of an imminent deal to return supply to the market.

The U.S., meanwhile, is sticking to its guns on the reserves sale. There are no plans to change the timing or amount of the announced release of 50 million barrels, the Energy Department said in a statement.