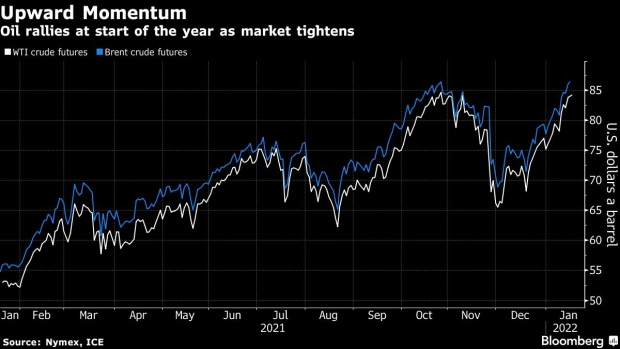 (Bloomberg) -- Oil climbed as geopolitical tensions stirred in the Middle East and concerns about the demand impact of the omicron virus variant eased.

Yemen’s Houthi fighters claimed to have launched drone strikes on the United Arab Emirates -- the third biggest OPEC producer -- that caused an explosion and fire on the outskirts of the capital Abu Dhabi, leaving three people dead. Futures in New York rose 0.5% from Friday’s close to trade above $84 a barrel. There was no settlement Monday due to the Martin Luther King Jr. Day holiday.

Crude has made a red-hot start to the year on stronger than expected demand that’s helped to tighten the market. Segments across the oil complex are showing strength, from diesel to jet fuel, which is soaring in Europe as global air travel withstands the impact of omicron.

One of the biggest attacks to date on UAE soil ignited a fire at Abu Dhabi’s main international airport on Monday and set fuel tanker trucks ablaze in a nearby industrial area. It took place days after the Iranian-backed Houthi fighters warned Abu Dhabi against intensifying its air campaign against them.