Oil was virtually unchanged as gains driven by diminishing crude inventories were tugged lower after Federal Reserve officials suggested they expect two interest rate increases by the end of 2023.

Futures in New York rose three cents on Wednesday. Equities fell and the dollar surged, reducing the appeal of commodities priced in the currency. Earlier, oil rose as much as 1.2 per cent after a U.S. government report showed domestic crude supplies tumbled last week and inventories at the nation’s biggest supply hub in Oklahoma dropped to the lowest since March 2020.

“If you’re holding oil, you’re going to be cautious that we could see a dip here,” said Ed Moya, senior market analyst at Oanda Corp. 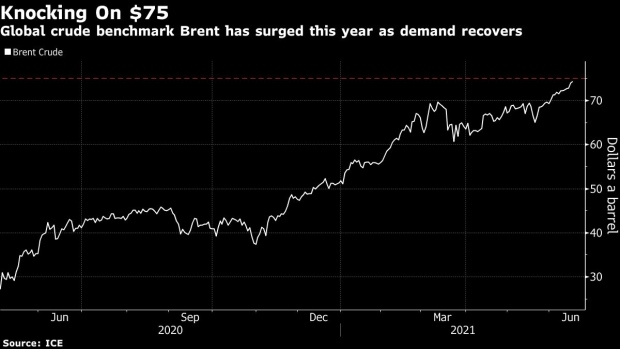 Brent futures traded in London are approaching the key psychological level of US$75 as leading economies continue to reopen in the midst of widespread COVID-19 vaccination programs. That’s boosting the consumption outlook and driving prominent traders like Glencore Plc and Vitol Group to forecast further gains in oil.

Exports of U.S. crude and fuels soared last week, the Energy Information Administration report showed. Chinese refiners recently raised activity to a record while gasoline and diesel sales in India have rebounded. Saudi Arabia issued a stark warning that an oil-price “supercycle” may be triggered by a lack of new exploration spending.

“The rest of the world is finally getting better,” Moya said. “We’re seeing availability of vaccines has improved dramatically.”

However, the Energy Information Administration report showed U.S. gasoline supplies ticked higher, despite rising demand, with refineries ramping up with the summer driving season underway. Refinery utilization has improved steadily for five weeks in a row.

“Some of this is protection in case we have a difficult hurricane season where we get some unforeseen disruptions,” said Moya.

Still, the market’s pricing structure continues to reflect an overall bullish tone, with near-dated prices above those further out. Brent’s prompt timespread was 80 cents a barrel in backwardation, up from 47 cents a week ago, signaling tighter supplies.