Oil slumped in New York after a surprise increase in U.S. crude inventories added to renewed concerns about demand recovery as China battles the coronavirus resurgence.

West Texas Intermediate futures tumbled 3.4 per cent to close at the lowest in more than two weeks. The delta variant of COVID-19 has been detected in almost half of China’s 32 provinces in two weeks, and at least 46 cities have advised residents against non-essential travel. Meanwhile, American crude supplies increased by 3.63 million barrels, the biggest gain since March, government data showed. Key timespreads for futures contracts tumbled in response to weakening supply-demand fundamentals.

“The resurgence in COVID infections in China is dampening perceptions of demand recovery,”said Peter McNally, global head of industrials, materials and energy at Third Bridge. 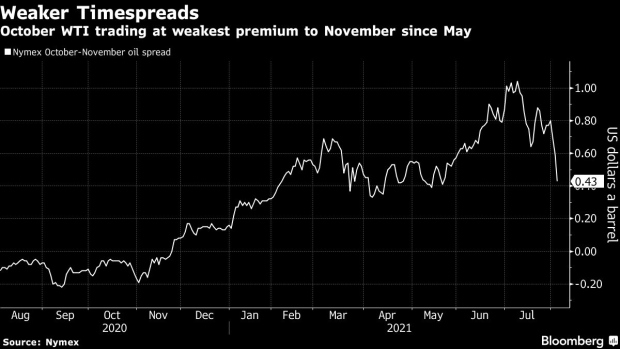 After eking out a small advance in July, August is proving to be tough for crude. Tightened controls in some Asian nations to curb the spread of the virus risk eroding oil demand at a time when the Organization of Petroleum Exporting Countries and its allies are gradually increasing supply.

The gloomy demand outlook continued to weaken timespreads in the U.S. oil market on Wednesday though the benchmark is still holding a bullish backwardation structure in which near-dated prices are trading at a premium to those further out. October futures traded at 44 cents a barrel above the November contract Wednesday, compared with more than US$1 a month ago.

“We’re seeing a continued increase in fuel consumption, which is a good sign of economic recovery. While there is clearly concern about the delta virus, overall we’re seeing continued recovery on the demand side,” said Quinn Kiley, portfolio manager at Tortoise.

China’s latest outbreak has spread to Beijing despite the capital’s stringent measures, with authorities taking steps Tuesday to ban rail passengers from 23 regions. The financial hub of Shanghai also reported a virus case this week. As risks escalate, analysts are reviewing their economic growth projections.

There have also been rising tensions near the Persian Gulf -- a region vital for the world’s oil markets -- in the past week. The British Navy said a ship was safe following a possible hijacking near Iran, days after a deadly drone attack on a tanker that the U.S., U.K. and Israel all blamed on the Islamic Republic.