Oil closed lower as traders assessed OPEC’s skepticism around the strength of crude demand even after prices hit the highest since 2014.

Futures in New York fell 0.3 per cent on Wednesday after trading little changed for most of the afternoon. OPEC revised down its estimate for 2021 global oil consumption in its monthly market report. The group said that while the spike in natural gas prices could boost petroleum use in some areas, such as power generation, it could potentially curb demand in other areas, such as refining.

While crude futures have shown some signs of fatigue, “the trend is still clearly bullish and requires a macro driver to turn the tide,” said Fawad Razaqzada, financial market analyst at ThinkMarkets.

Meanwhile, the industry-funded American Petroleum Institute reported a 5.21 million-barrel gain in U.S. crude supplies last week, according to people familiar with the data. 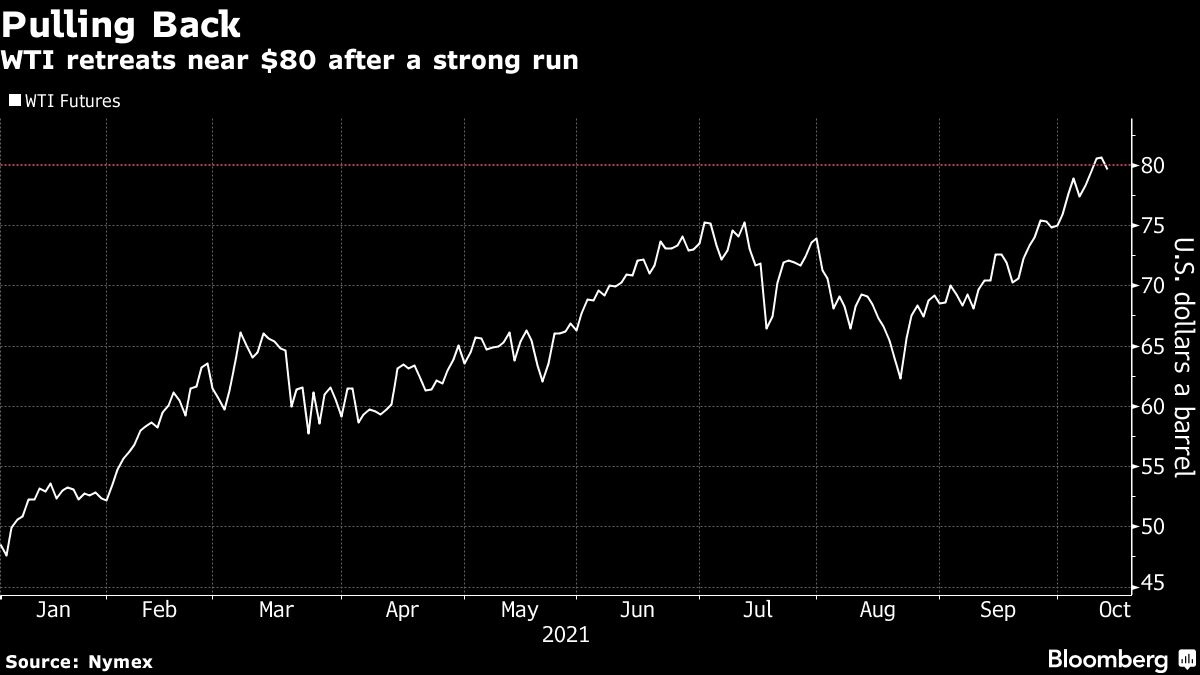 Crude has surged this year as a rebound in activity from the pandemic has boosted consumption, depleting inventories. In addition, shortages of natural gas and coal have driven rising demand for alternative power generation and heating fuels in Asia and Europe ahead of the winter. In fact, oil prices may even spike to over US$100 a barrel because of fuel switching, according to Bank of America’s Francisco Blanch.

However, in the near-term, West Texas Intermediate crude may see some selling pressure if prices fall below US$79.30 a barrel. Any dips in price until crude hits the US$76.50-a-barrel level will likely be viewed as a buying opportunity by traders, according to Razaqzada.

The API also reported supplies at the nation’s largest storage hub at Cushing, Oklahoma, fell 2.28 million barrels. A decline of that size would be the largest since February if Energy Information Administration data confirms it on Thursday.

The EIA boosted its forecast for annual average WTI and Brent prices in 2022 by US$5.87 to US$68.24/bbl and US$71.91 a barrel, respectively, according to the agency’s monthly Short-Term Energy Outlook on Wednesday. The agency also warned that spending on energy for those households primarily using heating oil will rise 43 per cent compared with last winter, according to its Winter Fuels Outlook report.

Russian President Vladimir Putin also said crude prices could reach US$100 a barrel. He also said that his country is ready to supply as much gas to Europe as it needs.