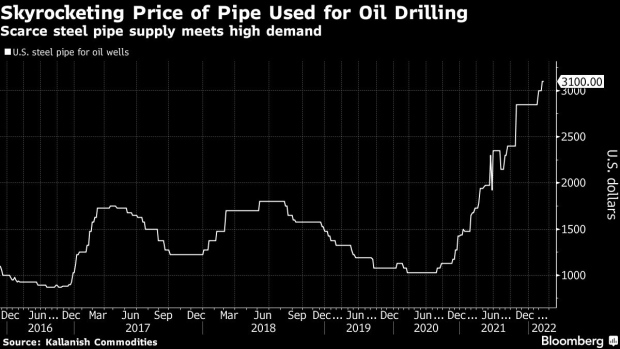 To drill more wells, they need steel tubes to line the inside of the holes and get the crude out. Those pipes have become more expensive and scarce. Oil and gas producers also have to boost wages to find and retain workers. They say those higher expenses, along with Biden administration’s tough environmental policy and investors’ pressure to keep costs under control, make them reluctant to ramp up production.

U.S. price for the pipes, known as oil-country tubular goods, or OCTG, hit $2,400 per ton this month, up 100% from a year ago, according to data from KeyBanc Capital Markets. The increase is driven by demand and concern that Russia’s invasion of Ukraine will sink pipe and tube imports from the region. Russia and Ukraine combined provide about 15% of all of the imported metal to the U.S., according to the U.S. International Trade Administration. Russia also supplies a key ingredient for welded goods, known as coupling stock.

“I cannot think of a time prior to this that I’ve seen the market this tight,” said Susan Murphy, publisher of the OCTG Situation Report, which has followed the sector for 36 years. “Everybody is really trying, at least in the tubular goods industry, to manage practically an unmanageable situation.”

“The largest cost increase over the past 12 months for the oil and gas industry is from tubular steel,” one energy executive told the Federal Reserve Bank of Dallas in the survey released in March. “Steel availability and pricing are also delaying quick activity ramp-up among several operators. This is impairing the ability to bring production online faster.”

Oil consuming nations globally, on the other hand, would like the U.S. to produce more oil, to make up for the sanctioned Russian crude. President Joe Biden has urged U.S. oil companies to pump more as the war in Ukraine led to skyrocketing oil and gasoline prices.

Oil explorers including Diamondback Energy Inc. and Concho Resources Inc. hunkered down when Covid-19 hit and the economy slumped. To survive the crude price crash, they slashed their workforce and held off on resupplying key ingredients including steel tubes. Demand for the tubes dropped more than 20% in 2021. Now, if the drillers want to ramp up and cash in on the highest oil prices in 14 years, they have less than 4 months of steel supply left for their wells. Such low levels were last seen in 2008, in the early days of shale drilling, Murphy said.

“It’s hard to see how this gets materially better,” Luke Lemoine, an analyst at Capital One Securities, said in a phone interview. “It could be an inhibitor to growth in the back part of the year.”