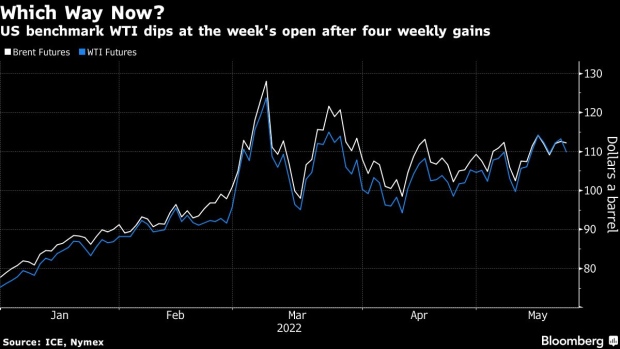 (Bloomberg) -- Oil declined at the start of the week’s trading as investors weighed tight product markets against concerns over slowing global growth.

West Texas Intermediate edged below $110 a barrel in early Asian trading following four consecutive weekly gains, the longest such run since February. Gasoline and diesel prices have rallied to records ahead of the start of the US summer driving season, which begins in about a week.

Over the weekend Saudia Arabia signaled that it will continue to support Russia’s role in the OPEC+ group of producers, undermining US-led efforts to isolate Moscow for its invasion of Ukraine, the Financial Times reported. Saudia Arabia was hoping “to work out an agreement with OPEC+ .... which includes Russia,” Energy Minister Prince Abdulaziz bin Salman told the newspaper.

Oil has surged this year on rising demand and the complex global fallout from Russia’s invasion. The rise in energy costs has contributed to rampant inflation, prompting central banks to raise rates and stoking investor concern growth will slow. At the same time, China has imposed a series of crippling lockdowns to quell Covid-19 outbreaks, hurting Asia’s largest economy.

Oil prices may have a ceiling of about $110 a barrel given China’s flagging demand, with economic growth reeling from Beijing’s efforts to stamp out Covid-19, according to an outlook from Bloomberg Intelligence. Bloomberg Economics has cut its full-year China growth forecast to 2% from 5.7%.

While prices have advanced in volatile trade, the Organization of Petroleum Exporting Countries and its allies including Russia have been restoring production shuttered during the pandemic at only a modest pace. So far, the alliance has resisted US entreaties to restore more capacity more quickly.

Oil markets remain in backwardation, a bullish pattern that’s marked by near-term prices trading above longer-dated ones. Brent’s prompt spread -- the difference between its two nearest contracts -- was $2.54 a barrel in backwardation, up from $2.13 a barrel a week ago.