Oil dropped as a strengthening dollar and mounting lockdowns in Europe blunted the potential impact of crude cargoes backing up outside the blocked Suez Canal.

Futures fell 4.3 per cent in New York on Thursday in the wake of a stronger U.S. dollar, which reduces the appeal of commodities priced in the currency. Work to re-float the massive ship that’s stuck in the canal continued without success. While the Suez blockage is complicating trade, a long-term realignment of global crude flows has seen westbound shipments from Persian Gulf producers fall, limiting the impact on oil prices.

The Suez Canal has “diluted importance as a transit hub for energy,” said Bob Yawger, head of the futures division at Mizuho Securities. Prices are facing pressure from the rising dollar, “the incredible inability of the euro zone in particular to take care of the COVID situation” and case numbers in the U.S. “going in the wrong direction.”

At the same time, the U.S. reported the most new cases on Wednesday since Feb. 12 and European countries have tightened restrictions recently. Volatility has risen to the highest since November, and traders see the market shedding length with little to stoke immediate optimism ahead of a full-fledged economic reopening from the pandemic. 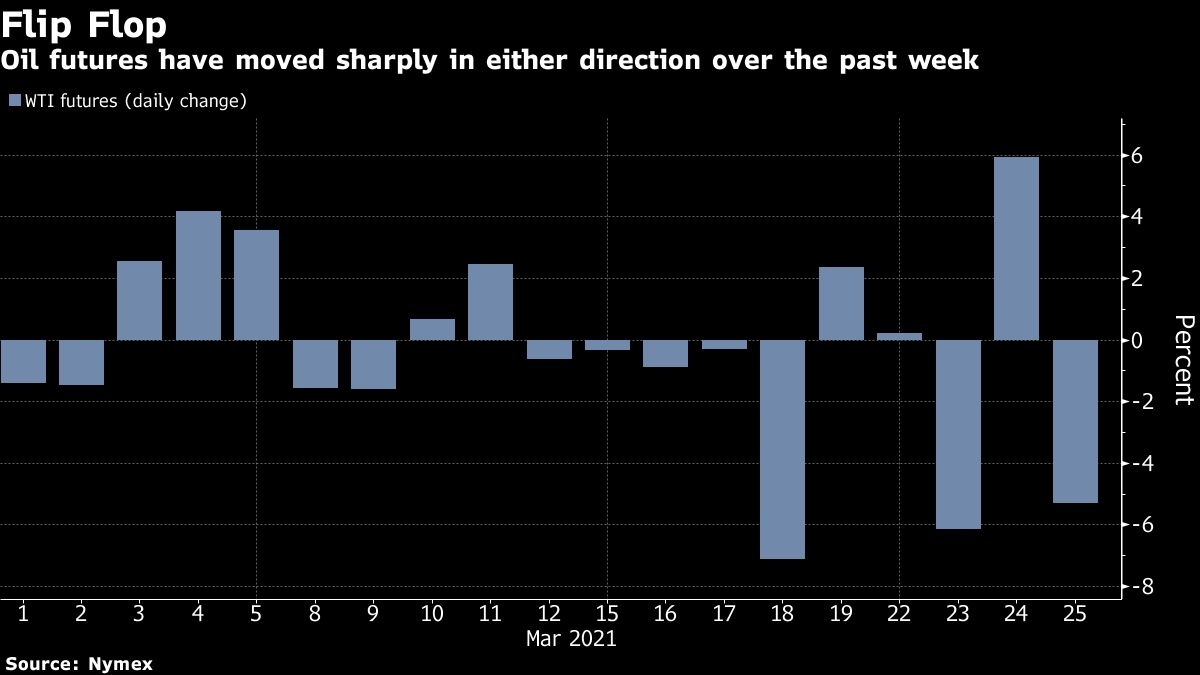 Despite the recent sell-off, oil is still up around 20 per cent this year and there is confidence in the longer-term outlook for demand as coronavirus vaccinations accelerate worldwide and OPEC+ continues to hold back supply. The alliance is scheduled to meet next week to decide production policy for May.

“It all got a bit too excited earlier with talk about supercycles and massive stock draws in the first quarter,” said Paul Horsnell, head of commodities research at Standard Chartered. That was “never on the cards, the big stock draws come later.”

Still, the prompt timespread for Brent has resumed trading in a bullish backwardation after briefly flipping to a bearish contango on Tuesday for the first time since January. The spread was 14 cents in backwardation on Thursday, compared with 67 cents at the start of the month.

Hedge funds had built up net long positions in WTI and Brent last month to the highest in over a year, according to a Bloomberg analysis of Commodities Futures Trade Commission and ICE data for four contracts. Since then, prices jumped to multi-year highs and above technical gauges indicating a correction was due, before last week’s price plunge sent futures in New York back near US$60 a barrel.

“People are concerned about the broader picture in the global economy and oil prices had already gone a long way,” said Peter McNally, global head for industrials, materials and energy at Third Bridge. “There’s pent up demand for travel, whether it be air or road. That is still coming. But in the near-term there’s a few hurdles we need to clear before we get to that point.”

Meanwhile, tugs and diggers have so far failed to dislodge the container ship in the Suez Canal, which has led to a gridlock of vessels waiting to pass. Some experts say the crisis could drag on for several days. The spring tide on Sunday or Monday will add extra depth and allow for more maneuvering, said Nick Sloane, the salvage master responsible for refloating the Costa Concordia.