West Texas Intermediate dropped to settle above US$107 after touching US$116, the highest since 2008, on Thursday. Brent nearly reached US$120 before pulling back. Oil swung through a US$10 range during the session as most major oil companies continue to implement a de-facto ban against Russian crude. The rally cooled after reports surfaced suggesting Iran may be close to signing an agreement. U.S. and European officials have also said a deal is close, but that there are still sticking points.

Crude markets have experienced an extraordinary run of volatility since Russia’s invasion of Ukraine unleashed further uncertainty into global oil markets. JP Morgan & Co. said Brent could skyrocket to as high as US$185 by the end of this year if current conditions continue. Buyers have steered clear of doing business with Russia as the U.S and others seek to isolate Russia from financial markets. Traders are offering Russia’s flagship crude at a record discount in an attempt to attract buyers.

“The market is selling off due to hopes of Iran deal coming in the next few days along with comments from Germany that they do not want to put an embargo on Russian crude,” said Rebecca Babin, senior energy trader at CIBC Private Wealth Management. “But the selloff is fairly shallow because the market is self-sanctioning Russian crude and effectively taking 3 million barrels of crude off the market.” 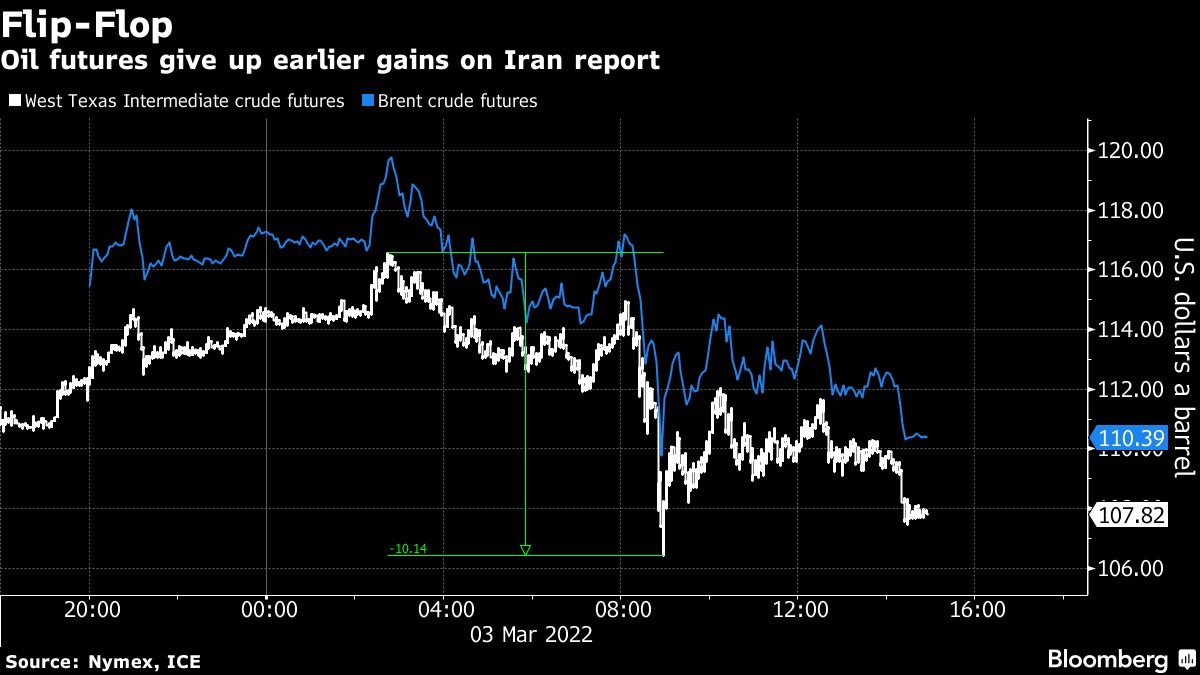 Oil markets had already tightened significantly prior to the invasion, after economies rebounded strongly from the pandemic. Surging energy costs have added to inflationary pressures on the global economy, boosting the prices of everything from gasoline at the pump to diesel used by industrial consumers. The International Energy Agency has warned that global energy security is under threat while a planned emergency release of crude reserves by the U.S. and its allies has done little to quell market fears.

U.S. lawmaker support for an outright ban of oil and gas imports is growing with Democratic House Speak Nancy Pelosi saying she’s “all for” a bipartisan draft bill to cut off Russian supplies to the U.S.

The American Fuel and Petrochemical Manufacturers “fully supports the suspension of all future purchases of crude oil and petroleum products from Russia,” the trade group said in a letter to legislators. The White House reiterated it’s not interested in a Russian oil ban on Thursday. German Economy Minister Robert Habeck is also against the idea of a ban on imports of Russian energy.

Despite the market turmoil, the Organization of Petroleum Exporting Countries and its allies are sitting on the sidelines. The group stuck with the 400,000 barrel-a-day production increase that was scheduled for April and wrapped up a Wednesday meeting in a record time of just 13 minutes, delegates said.

Brent remains in deep backwardation, a bullish structure where prompt barrels are more expensive than later-dated cargoes, indicating nervousness over tightening supply. The benchmark’s prompt spread was US$3.11 a barrel, and has touched record levels in recent days.