West Texas Intermediate dropped to settle at US$118.50 a barrel after earlier touching a three-month high. Indian refiners are working on finalizing new six-month supply contracts for Russian crude, which if secured would be on top of the country’s existing purchases from Russia. This offset an earlier rally driven by Saudi Arabia’s boost to its official selling prices to Asia, which the market interpreted as a signal of the kingdom’s confidence in demand.

“Energy traders are confident this oil market will remain tight given the short-term supply outlooks from both OPEC+ and the US, but it has been a steady climb higher,” said Ed Moya, senior market analyst at Oanda. “Exhaustion could be settling in.” 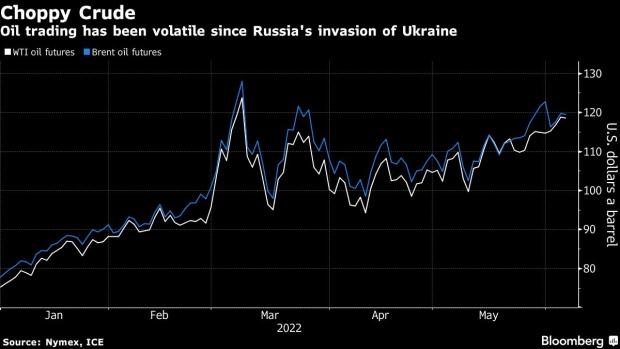 Oil has rallied over 50 per cent this year as rebounding demand from economies recovering from the pandemic coincided with a tightening market after Russia’s invasion of Ukraine. Fuel markets have also tightened considerably, just as the peak period for US demand kicks off with the summer driving season. Retail gasoline prices have rallied to a record, while futures in New York hit a fresh high on Monday.

Last week, OPEC+ agreed to accelerate output increases following repeated calls by the US to pump extra volumes. The producer group said it would add 648,000 barrels a day for July and August, about 50 per cent more than the increases seen in recent months. However, the group has struggled recently to meet its supply targets, raising doubts about whether it would be able to meet the goal.

Saudi Aramco raised its key Arab Light crude grade for Asian customers by US$2.10 a barrel from June to US$6.50 above the benchmark it uses. The market was expecting a boost of US$1.50, according to a Bloomberg survey. The kingdom’s apparent confidence in Asian demand comes as China cautiously emerges from virus lockdowns that have strained its economy.

Meanwhile, Brent remains steeply backwardated, a bullish structure where near-dated contracts are more expensive than later-dated ones. The prompt time spread for the global benchmark touched US$2.84 a barrel in backwardation earlier in the session.