Oil posted its worst week in three amid concerns that rising global coronavirus cases are slowing the economic recovery.

West Texas Intermediate futures ended the week down 3.5 per cent, the biggest weekly loss since mid-March. With the Organization of Petroleum Exporting Countries and its allies planning to start raising output, markets are now focused on whether the demand recovery will be enough to absorb growing supplies.

While consumption is climbing in India and the U.S., rising virus cases and the possibility of stricter travel limits in Europe are muddying the forecast and putting pressure on crude. Oil plunged Monday after the U.K. said it may delay global travel beyond May 17.

“The COVID situation has really not had a strong recovery in Europe and across many emerging markets, and that’s really weighed down the demand outlook for oil,” said Edward Moya, senior market analyst at Oanda Corp. 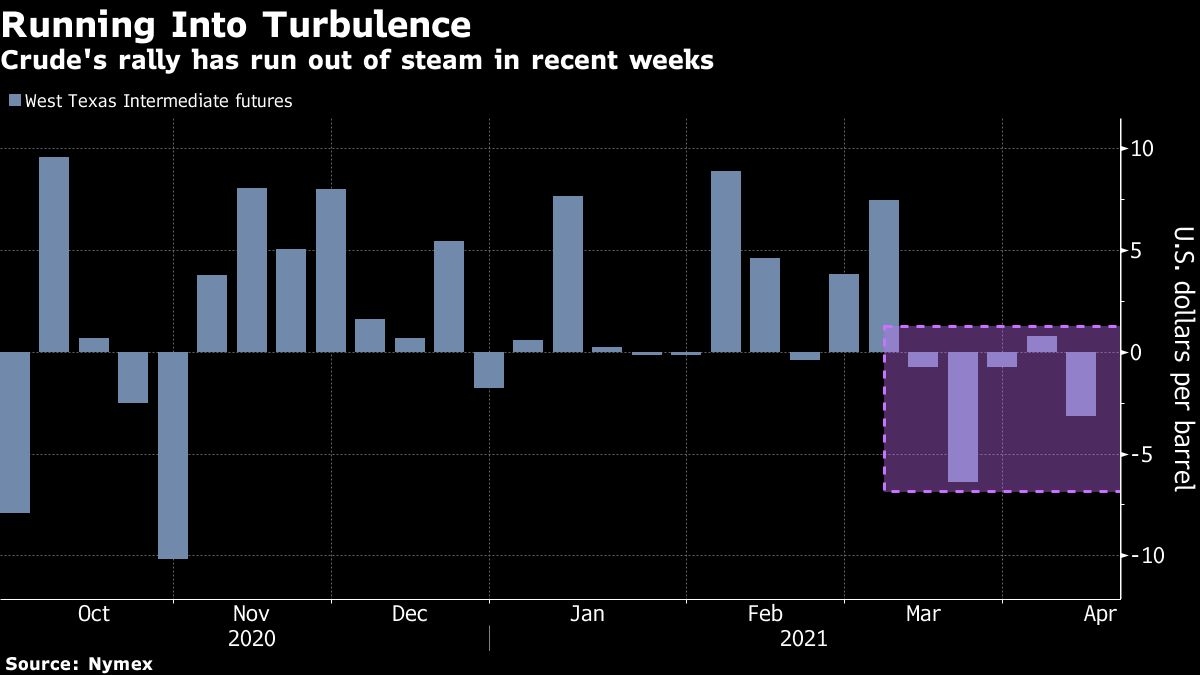 “If we get some hotter inflation readings, that could send Treasury yields higher again,” negatively impacting oil, according to Moya.

Saudi Arabia said it remains confident that OPEC+ made the right decision to increase production over the next three months, and there are signs of better days ahead for demand that could soak up the additional barrels.

India’s oil-products demand in March rose to the strongest since late 2019, while Germany reiterated support for a short, strict lockdown in the country. In the U.S., traffic is roaring back in some cities, an indication of stronger demand this summer.

Making the calculation even more complex are ongoing talks between Iran and world powers to resuscitate a 2015 nuclear deal, which would set the stage for the Persian Gulf to increase supply. Negotiations are set to continue next week, though no direct contacts between Iranian and U.S. envoys have yet been made.

Crude in New York has around US$60 a barrel since mid-March, with market volatility slumping to the lowest in a month. Prices haven’t broken out of a US$5 trading range over recent weeks, and have oscillated in smaller and smaller bands with each passing day -- creating a technical pattern some see as indicative of a breakout higher.

“We’re toward the lower end of the range on concerns over the global economic recovery,” said Gary Cunningham, director at Stamford, Connecticut-based Tradition Energy. “Until we start to see some jet fuel demand come back, Asian demand pick up and European countries ease restrictions,” prices may not surge much higher in the near term.