Oil continued to climb on optimism that the omicron virus variant may not be as severe as feared, easing concern over the demand outlook.

West Texas Intermediate rose as much as 5.1 per cent on Tuesday, before ending the day at around US$72 a barrel. Crude’s advance mirrored a similar relief rally in equities, with the S&P 500 jumping 2.2 per cent to the highest level since late November. Initial data show the surge in omicron cases hasn’t overwhelmed hospitals so far, and there’s little evidence of a significant hit to global oil consumption.

“While there is probably going to be some demand destruction because of omicron, the market priced in a lot worse than what it’s going to be,” said Phil Flynn, senior market analyst at Price Futures Group Inc. “We are getting back to more real fundamentals versus the fear fundamentals we were trading on last week.”

Some oil analysts saw oil’s plunge in recent weeks as driven by low liquidity and so-called negative gamma effects, where options dealers are forced to sell futures contracts to hedge their risk. When prices rise, like they have in recent days, those traders often buy back the futures they sold, further fueling the rebound.

“The sigh of relief rally continues for a second day in energy and equity markets, and volatility indices are moving lower as the Omicron fears appear to be subsiding,” TACenergy analysts wrote in a note to clients. 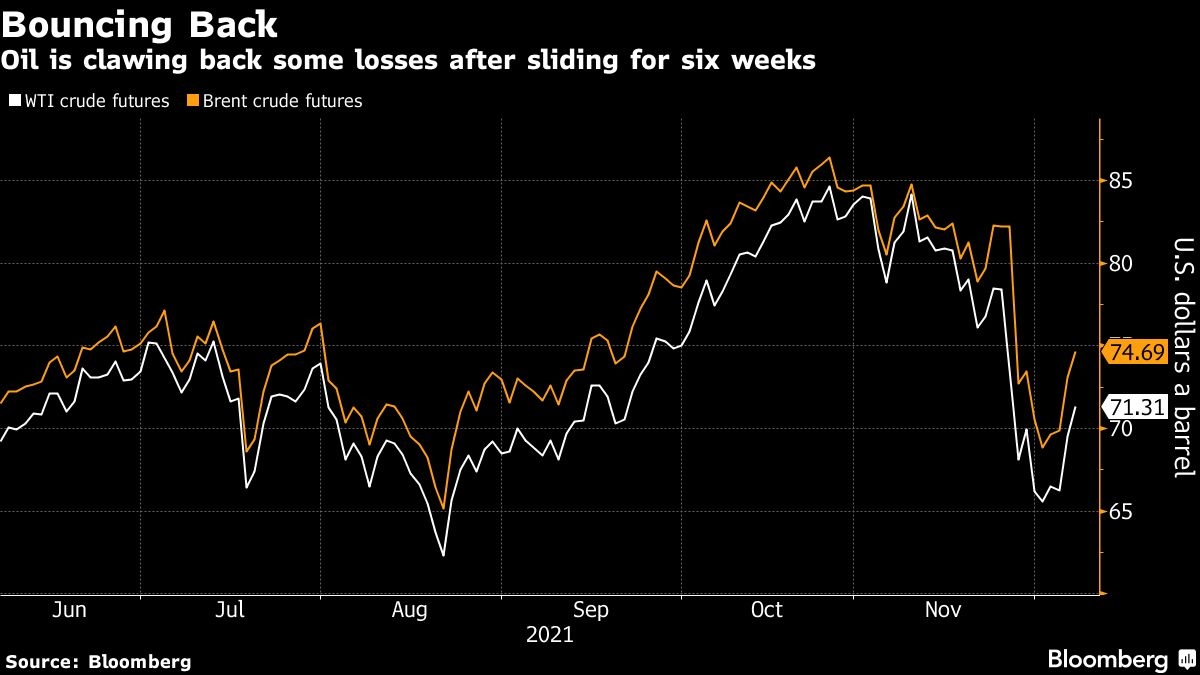 Worries about the omicron variant pushed crude into a bear market last week. On Tuesday, the U.S. Energy Information Administration cut its projections for both global benchmark Brent and WTI by nearly US$2 a barrel for 2022 as a result of travel restrictions following the outbreak of the variant.

Still, prices have been steadily strengthening this week as the demand hit from omicron has so far been limited. Citigroup Inc. said on Tuesday it is bullish prices in the short-term, and Saudi Arabia’s move on Sunday to increase the cost of its crude for January gave the market confidence that the consumption outlook would remain robust.

Adding to bullish sentiment, the prospect of a deal to unlock sanctions on over 1 million barrels per day of Iranian oil exports is receding, RBC analyst Helima Croft said in a report.

In China, oil imports rose to a three-month high in November after refiners were allocated new quotas, according to government data. Overall exports also hit a record as external demand surged ahead of the year-end holidays. Additionally, American crude exports to China surged in October to the highest level since May, according to U.S. Census Bureau.

While Citi said the oil market should recover from its recent losses, it painted a more bearish picture for the longer-term outlook. It expects prices at the back of the curve to weaken, as OPEC+ nations look to pump more and non-OPEC+ supply remains readily available between US$50 and US$60 a barrel.

Omicron has prompted France to shut nightclubs for four weeks, while New York City called for a private sector vaccine mandate and Hong Kong imposed quarantine requirements on more countries. The Eastern Chinese city of Ningbo imposed a lockdown on its Zhenhai district and closed some schools to stem a local outbreak, echoing the country’s strict COVID-Zero strategy that doesn’t tolerate any sorts of flareups.

Meanwhile, over the past week some traders have bet on the small chance that WTI’s discount to Brent will surge past US$10 a barrel next year. The long-shot wager is a signal that some market participants believe the Biden administration could intervene in the market again to bring down oil prices.