Oil eked out a meager gain as the dollar weakened, with much of the market waiting to see what the Federal Reserve will decide regarding rate hikes when it meets later this week.

West Texas Intermediate inched forward to settle above US$85 a barrel, paring earlier losses as the dollar dropped from record highs. Oil fell as much as 3.5 per cent to near US$82 a barrel as markets look ahead to a week filled with global central-bank decisions. Monetary policymakers will decide whether to try to tame inflation with further interest-rate hikes.

The afternoon’s price rally was “a knee-jerk reaction to the oversold situation that we had this morning,” said Robert Yawger, director of the futures division at Mizuho Securities USA. “I’d be surprised if we held onto these gains over the next couple of days,” especially heading into the Federal Reserve’s decision on Wednesday.

Meanwhile, the potential for increased supplies has added bearish headwinds to the commodity. The US announced it will offer an additional 10 million barrels from its strategic petroleum reserves. The UAE’s national oil company is accelerating its plan to produce 5 million barrels of crude a day by 2025. Additionally, refiners in China have applied for an extra 15 million tons of fuel export quota, which could potentially unleash a flood of gasoline and diesel. 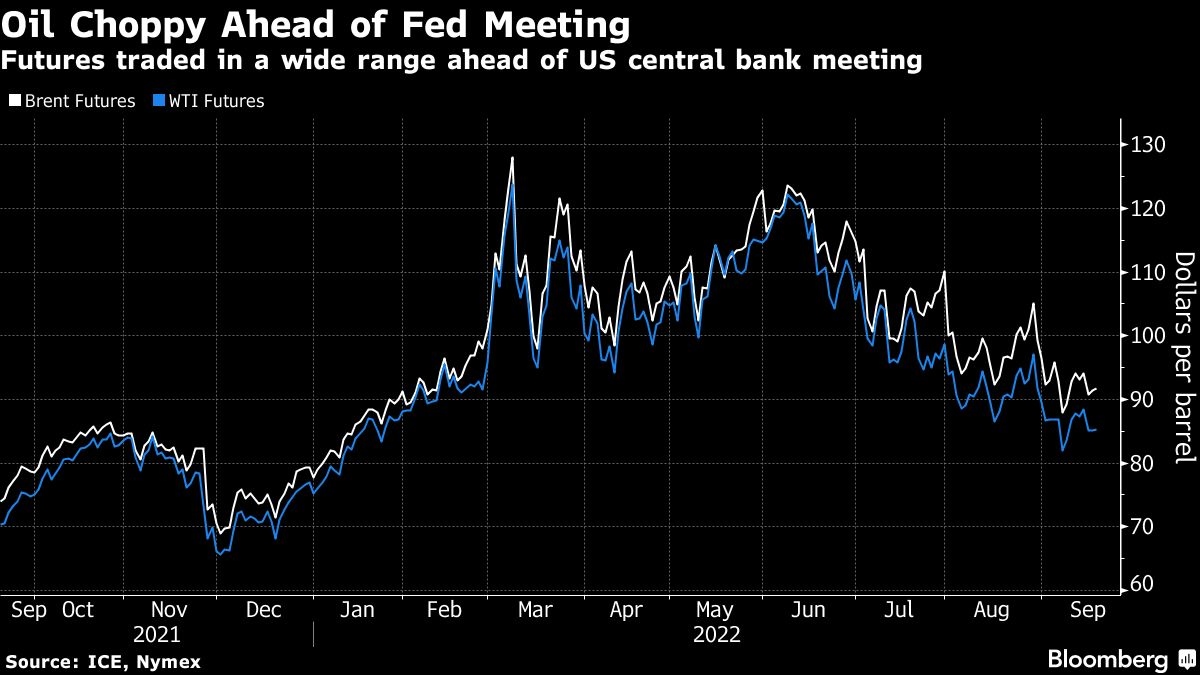 Earlier this month, crude prices dropped to the lowest since January with the US dollar rallying to record highs as central banks prepared for more interest-rate hikes. Continued lockdowns in China are also stifling demand in one of the world’s biggest oil consumers. Concerns that a global slowdown will sap energy demand have put oil on track for its first quarterly decline in more than two years.

Global demand for oil slumped in July, dropping by 1.1 million barrels a day in a period which usually sees oil usage creeping up, according to the Riyadh-based International Energy Forum. China’s crude imports and use of oil in refineries fell year-on-year, according to data from the Joint Organizations Data Initiative, to which the IEF contributes.

Despite prices easing in the short term, high energy costs are threatening to pull Europe into a painful recession, with governments in the region taking steps to shore up energy supplies. Germany on Friday seized the local unit of Russia’s Rosneft PJSC, as Berlin moves to take sweeping control of its energy industry and sever decades of deep dependence on Moscow for fuel.

Iran’s President Ebrahim Raisi said he needed guarantees that the US won’t walk away again from a nuclear deal as a condition for the Middle Eastern country entering into an accord. A new agreement would lead to the return of Iranian crude to a tight oil market, though negotiators remain at loggerheads.