Oil rose after swinging in a choppy session as traders counted down to an OPEC+ crude production meeting.

West Texas Intermediate settled above US$94 after trading in an almost US$4 range on Tuesday. Markets wavered earlier in the session amid concerns that US House Speaker Nancy Pelosi’s visit to Taiwan would intensify tensions with China.

OPEC+ is due to gather virtually on Wednesday to decide output policy for September. Oil-watchers are skeptical that the coalition will answer President Joe Biden’s call for more oil supplies, expecting OPEC+ to preserve its remaining capacity for another time. As the meeting nears, oil’s backwardation -- a bullish pattern -- has narrowed amid signs that physical markets have eased in recent weeks.

Crude prices rallied from lows “on expectations OPEC+ will refrain from delivering an output increase and as China’s immediate retaliation to House Speaker Pelosi’s trip to Taiwan are symbolic gestures but not quite threatening to global supply chains and demand drivers,” said Edward Moya, senior market analyst at Oanda. 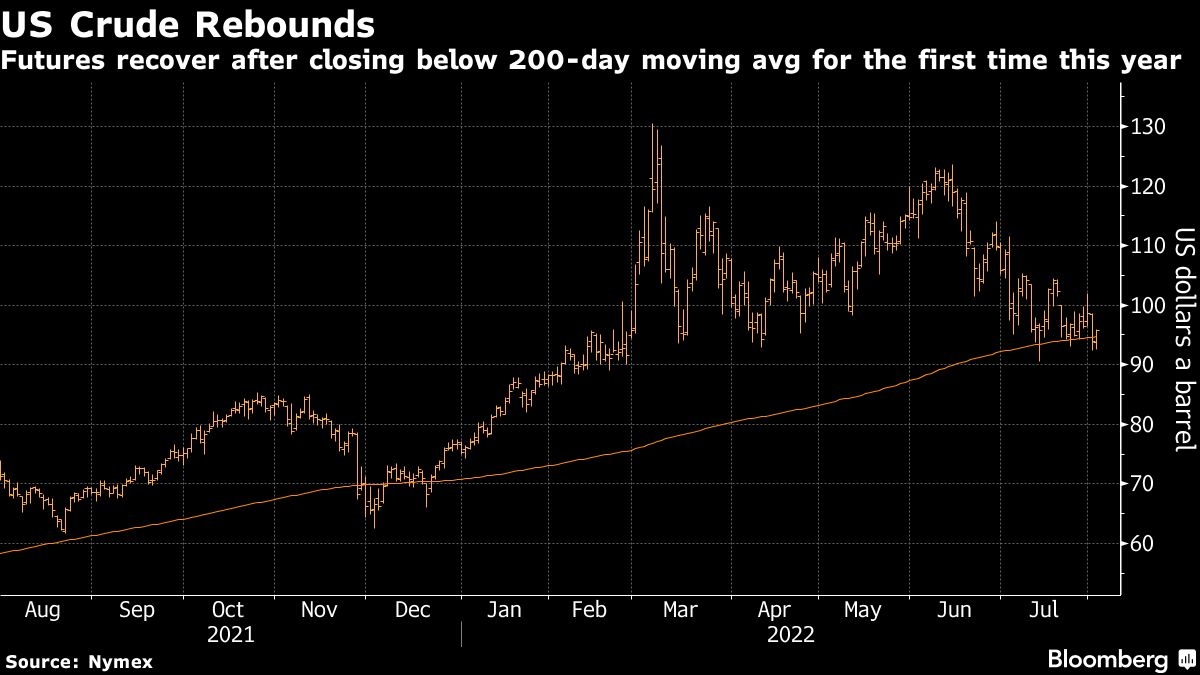 Oil has opened August on a weak footing after declining the prior two months on demand concerns. The drop has wiped out almost all of the gains seen since Moscow’s invasion of Ukraine in late February, even after Washington and the European Union imposed a raft of sanctions on Russian energy exports.

“A global economic slowdown might be happening, but crude prices have come down too far given how tight the physical market remains,” Moya said.

US crude futures closed below its 200-day moving average for the first time this year on Monday. The level is considered by many to provide technical support and prices have since rebounded.

Brent’s prompt spread -- the difference between its nearest two contracts -- has narrowed considerably as economic concerns deepened, Libyan production recovered and signs emerged of weaker US gasoline demand. The differential was US$2 a barrel on Tuesday, down from near US$4 about a month ago.

The OPEC+ meeting comes after US President Joe Biden urged Saudi Arabia to pump more oil on a visit to the kingdom last month. The alliance has already agreed to return all the supplies it took offline following the outbreak of the pandemic, although some members have been unable to meet quotas in full.

Investors are also digesting earnings from supermajor BP Plc, which raised its dividend and boosted share buybacks after profit rose to the highest since 2008. The company reported strong refining margins and an “exceptional” performance from oil trading. Adding to a growing list of firms reporting the best profits in their history, Vitol Group, the world’s largest independent oil trading company, posted a record profit of US$4.2 billion last year as it benefited from soaring energy prices.