Why this investor says oil companies will be 'bankrupt' in 2050

Oil rose to the highest settle in over two years, drawing support from higher-than-forecast U.S. inflation data and a firming market structure.

Futures in New York rebounded from a plunge of as much as 1.8 per cent earlier on Thursday that followed reporting of U.S. removing sanctions on a former Iranian oil official.

Crude found support with U.S. consumer prices in May topping forecasts, extending a months-long buildup in inflation that is seen helping spur more interest in alternative assets like commodities to find yield. At the same time, oil’s market structure strengthened amid recovering demand and signs global supplies may be less than expected.

“The outlook for oil demand is staying strong and getting stronger,” said John Kilduff, a partner at Again Capital LLC. Meanwhile, “there’s an inflation pulse rippling through the commodity sector, and crude oil is a big participant as a base hedge element against inflation.” 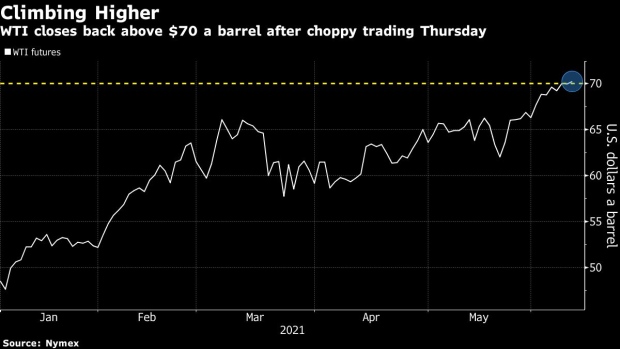 Prices remain over 40 per cent higher this year. Even as the Organization of Petroleum Exporting Countries expects the global demand recovery to gather steam in the second half of the year, the spare capacity buffer of the group and its allies have is seen being less than 80 per cent than what it is on paper. OilX analysts also flagged “several signs” in their data that oil supplies worldwide are surprising to the downside, reflecting a combination of mature field declines and maintenance that was delayed into this year.

The U.S. announced it deleted sanctions on a number of people, including former managing director of the National Iranian Oil Company.

“I would not read too much into Treasury’s action today to remove sanctions against an Iranian oil official,” said Hagar Chemali, a nonresident senior fellow with the Atlantic Council’s GeoEconomics Center. “The fact that no statement was made in connection with this de-listing is Treasury’s way of saying there isn’t much there there.”

In a sign of wider market strength, nearby futures contracts were outpacing the gains in subsequent months. The prompt timespread for Brent closed at its strongest level since April on Thursday, rising above 50 cents a barrel. That structure indicates tight supply in the Atlantic Basin region.

Meanwhile, a longer-term debate continues to rage about the viability of oil investments. Group of Seven leaders are discussing plans to shift the balance of car-buying away from gasoline to greener vehicles by the end of the decade. That comes just a day after Shell said it would hasten its reduction in carbon emissions.