Oil rose as a weaker dollar lent support and offset a burgeoning pile up of crude in the U.S. Gulf Coast as refineries there cut runs in response to the Colonial Pipeline shutdown.

Colonial Pipeline Co. is working to restart its oil-products system, the largest in the U.S., after a cyberattack shuttered operations. While gasoline stations from Alabama to Virgina report shortages, refiners in the U.S. Gulf are reducing output to avoid a glut in the absence of the pipeline. Some refiners have already chartered ships to store refined products offshore.

“The dollar index trading lower explains the slight increase in oil prices,” said Bob Yawger, head of the futures division at Mizuho Securities. The weak dollar may have saved the day for crude oil, which was facing pressure from refiners being forced to store barrels they can’t feed into the pipeline, he said. 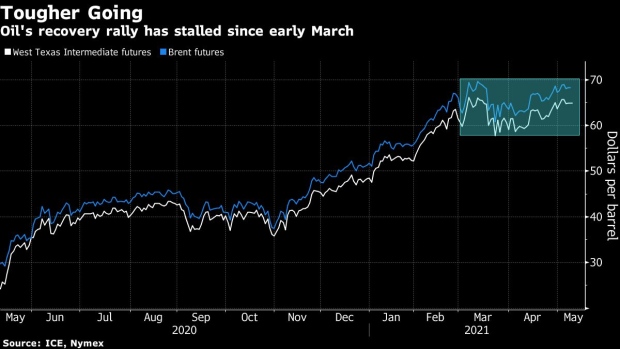 U.S. crude oil prices are up 2.7 per cent so far this month even with coronavirus-induced demand concerns, particularly in India, limiting rallies. Still, the Organization of Petroleum Exporting Countries on Tuesday lifted its forecast for the amount of crude it will need to produce and the group now sees a small decline in U.S. supplies this year, mostly due to the Texas freeze in February.

Traders are expecting “a gradual resolution to the Colonial Pipeline shutdown,” according to Louise Dickson, an analyst at consultant Rystad Energy. “The market is again looking to Asia, COVID-19 cases, and the next signals for oil demand outlook.”

Meanwhile, the knock on impact of the Colonial disruption is rippling through to everything from refining to shipping. Among processors, Total SE scaled back activity in a key unit at its Port Arthur, Texas, refinery, and Citgo Petroleum Corp. also cut rates at its Lake Charles, Louisiana, plant. There’s been a rush to book oil tankers as traders seek to redress the supply imbalance caused by the stoppage.

“We are far from out of the out of the woods with the Colonial situation,” said Kilduff. “A scare among consumers is increasingly likely, where a run on gas stations may develop more broadly, especially if there is no resolution by the end of the week.”

The U.S. East Coast has lost about 3.6 million barrels of gasoline supply due to the Colonial Pipeline disruption, with the region losing an additional 1.2 million barrels each day the outage continues, according to FGE.

In the U.S., crude supplies are expected to have dropped last week, according to a Bloomberg survey. The industry-funded American Petroleum Institute will report its supply tally later Tuesday, while government data will be released on Wednesday.