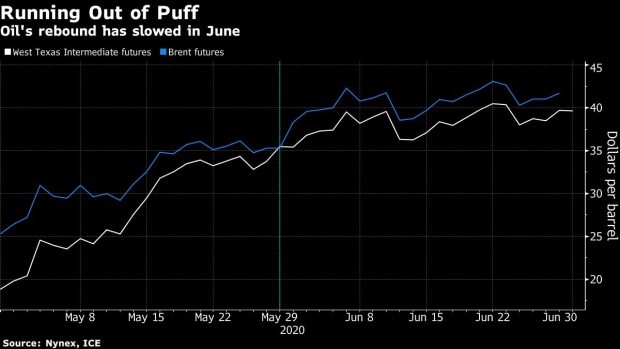 The Well-Safe Guardian plug and abandonment rig, operated by Well-Safe Solutions Ltd, stands in the Port of Cromarty Firth during sunrise in Cromarty, U.K., on Tuesday, June 23, 2020. Oil headed for a weekly decline -- only the second since April -- as a surge in U.S. coronavirus cases clouded the demand outlook, though the pessimism was tempered by huge cuts to Russia's seaborne crude exports. , Bloomberg

(Bloomberg) -- Oil edged lower in Asia after jumping the most in almost two weeks on Monday as better-than-expected U.S. housing data countered fears that a surge in virus cases would hamper the country’s economic recovery.

Futures in New York fell toward $39 a barrel after rising 3.1% on Monday as a record increase in pending home sales spurred gains across financial markets. Yet with the coronavirus running rampant across the southern and western U.S. and many states pausing or reversing re-opening measures, the outlook for energy demand in the world’s largest economy remains uncertain.

West Texas Intermediate has risen around 11% this month, while Brent is up 17%. However, gains in both the U.S. and global benchmarks have slowed in June following spectacular rebounds in May.

Production curbs from OPEC+ and other nations have helped to rebalance the market over the last couple of months, but global consumption still has a long way to go to get back to pre-virus levels. Gasoline demand in the U.S. fell 2.3% on Saturday from a week earlier, according to data from GasBuddy, showing how the increase in virus cases is restraining activity.

“Supply cuts have done their part and have been fully priced in,” said Vandana Hari, founder of Vanda Insights in Singapore. “Brent appears to have found a floor at $40, but the upside is likely to be limited” and the market is keeping a nervous watch on the pandemic’s resurgence in the U.S., she said.

The contango in Brent’s three-month timespread was 41 cents. The market structure -- where near-dated contracts are cheaper than later-dated ones -- indicates there’s still some lingering concern about over-supply.

Chinese manufacturing data for June released on Tuesday beat estimates, showing the recovery in Asia’s largest economy is intact. The country’s state-owned refining giants are in talks to form a joint purchasing group to buy crude, a move that has the potential to alter the balance of power between buyers and sellers in the oil market.

Meanwhile, tribes in eastern Libya backed the restart of oil production from the fields in their region. That was shortly after the state energy company said negotiations between the U.S. and regional governments could lead to a resumption of exports from the war-battered OPEC member.