Commodities could get back to the prices we saw last month on China's reopening: Strategist

Oil fluctuated in a choppy session amid concerns of an economic recession and as additional lockdowns in China dampen demand outlook.

West Texas Intermediate steadied near US$109 a barrel as it traded in a US$5 range on Thursday. Investors shied away from equities and many commodities after Federal Reserve officials reaffirmed much tighter monetary policy lies ahead to cool an overheating economy and tame inflation.

Crude’s outlook has also been clouded as China struggles to contain a wave of COVID-19 infections. While the financial center of Shanghai has begun to emerge from a punishing lockdown, there have been fresh outbreaks in other cities and disruption in Beijing. The country is the world’s largest oil importer. 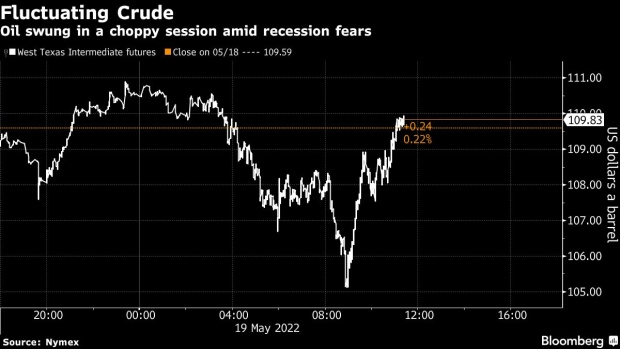 Despite recent weakness brought on by recession fears, oil prices are up more than 40 per cent this year amid strength in product markets, lower global inventories, and record gasoline prices. US crude data revealed continued market tightness with gasoline inventories falling to the lowest since December and a pickup in demand.

An explosion was reported at the Ulsan refinery in South Korea which has a capacity of 580,000 barrels a day. Gasoline futures erased losses, which were earlier down 4.8 per cent. The explosion injured eight workers, the Yonhap News Agency reported.

Oil markets remain in backwardation, a bullish pattern marked by near-term prices trading above longer-dated ones. Brent’s prompt spread -- the difference between its two nearest contracts -- was US$2.02 a barrel in backwardation, compared with US$1.46 a week ago.