Oil emerged from a volatile session largely unchanged after Saudi Arabia denied a report that it was discussing an oil-production increase.

Brent and WTI settled little changed after swinging in a US$5 range on Monday. The global benchmark’s prompt spread briefly dipped into contango after the Wall Street Journal reported that OPEC+ is considering an output hike of 500,000 barrels a day. Saudi Arabia denied the report, adding the “current cut of 2 million barrels per day by OPEC+ continues until the end of 2023.” The UAE also said it has not discussed changing the bloc’s last agreement.

The whipsaw in prices served as a reminder of how vulnerable the market remains to sharp swings driven by dueling headlines. Volatility jumped the most since late June when the Group of Seven nations started to consider a price cap on Russian crude. Despite recovering from intraday lows not seen since January, prices remained lower as China reported its first deaths from Covid in six months and lockdowns tightened in some cities.

“Trading in a 5 per centrange supports the opinion that the extreme headline risk in the commodity makes it difficult to put real money to work, which has resulted in reduced volumes and open interest through all of 2022,” said Rebecca Babin, a senior energy trader at CIBC Private Wealth Management. 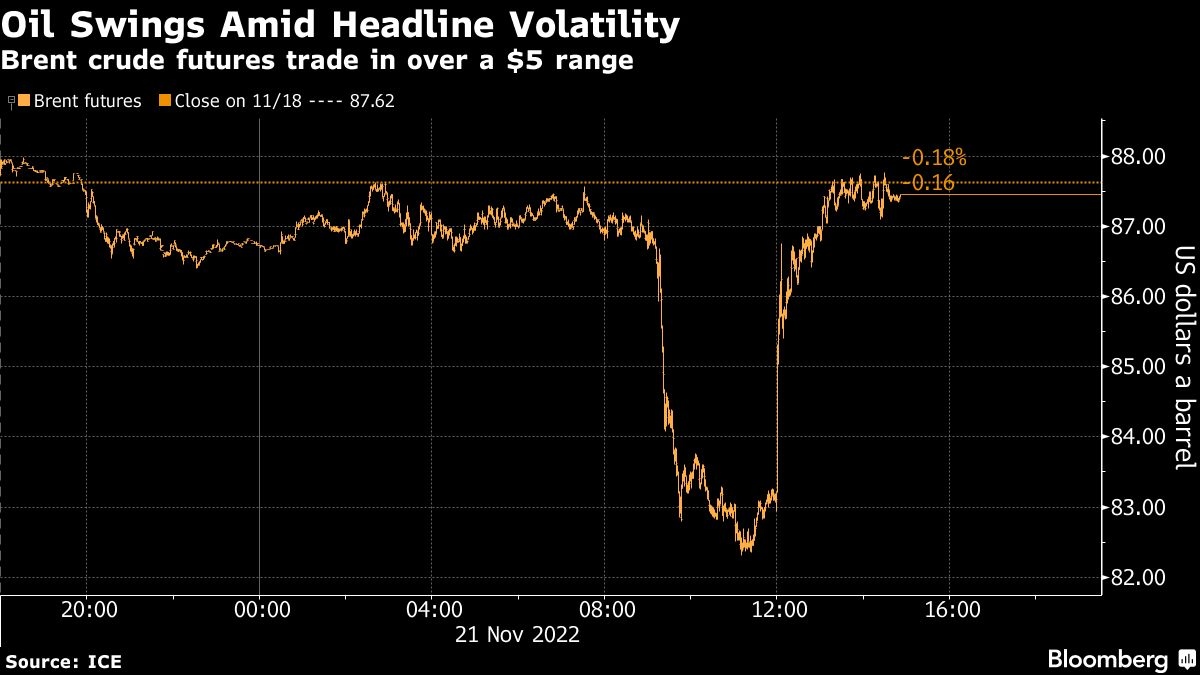 Crude has erased the gains made at the start of the quarter, when the Organization of Petroleum Exporting Countries and allies, including Russia,  agreed to reduce production by 2 million barrels a day. A looming European Union ban on Russian seaborne flows and the G7’s price-cap plan are clouding the outlook, with officials possibly set to announce the cap’s level on Wednesday as they step up their response to Moscow’s invasion of Ukraine.

The more-active January contract slipped 7 cents lower to settle at US$80.04 a barrel.

Goldman Sachs Group Inc. lowered its fourth-quarter forecast for Brent crude by US$10 to US$100 a barrel, according to a note, with the reduction driven in part by the possibility of further anti-virus measures in China as cases climb.