Oil in New York surged the most in a month on Friday as prices garnered support from a recovery in equities and a softer dollar.

West Texas Intermediate climbed back above US$65 a barrel, eking out a third straight weekly gain as a weakening dollar boosted appeal for commodities priced in the currency. Concerns persist over the spread of COVID-19 in Asia, which has tempered further gains.

Progress on reopening economies in countries including the U.S. supports expectations for heavy summer travel, buttressing the market’s underlying structure from recent weakness. The premium of Brent’s nearest contract against the next month strengthened on Friday to its widest in over a week. Growth in that structure, which is called backwardation, suggests the market is expecting tighter supplies.

“The economy looks a lot better,” with the U.S. easing its mask mandate “suggesting that we’re going to be close to normal soon,” said Michael Lynch, president of Strategic Energy & Economic Research. Still, “any boost that happens with demand will likely be met by restored supply.” 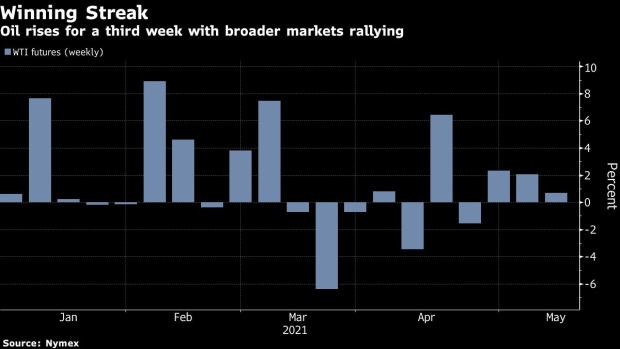 Oil prices have been stuck in a range lately, with optimism around global inventories rebalancing being offset by constant reminders that parts of the world remain far from a full recovery from the pandemic. The International Energy Agency said this week that the global glut that built up last year has cleared. However, the agency also lowered its demand estimates due to the virus resurgence in India.

“So far, the demand recovery is still fairly uneven,” said Bob Ryan, commodity & energy strategist at BCA Research. “COVID has not yet been contained. But next year, prices more than likely drift up toward US$70 a barrel, because of the synchronization of the global recovery from the pandemic.”

Meanwhile, gasoline stations are still in the process of returning to normal following the restart of the Colonial Pipeline. Fuel supply disruptions in parts of the U.S. East and South may still be weeks out from returning to normal after a cyberattack halted the largest fuel pipeline in the U.S.

Oil demand looks set to continue rising into this summer with restrictions easing in many of the world’s largest economies. President Joe Biden’s administration announced Thursday that fully vaccinated Americans can ditch masks in most settings. Elsewhere, Italy is poised to lift quarantine restrictions for arrivals from the European Union, the U.K. and certain other countries starting this weekend.

But India’s sustained struggle with the latest outbreak is continuing to weigh on markets. Some local ports have declared force majeure due to staffing shortages. Elsewhere in the region, Singapore will reimpose curbs, Japan plans to extend restrictions and China saw its first coronavirus infections in about a month.