Futures in New York closed 0.2 per cent higher on Monday. U.S. September industrial production fell 1.3 per cent, below estimates. Still, a shortage of natural gas is creating extra demand for oil products like fuel oil and diesel from the power generation sector, keeping oil prices propped up. Plus, the OPEC+ alliance is still only adding incremental, monthly supplies, and some members aren’t expected to meet current output targets.

“If these negative trends continue, it implies that industrial demand for energy may be weaker than expected in the future,” said Bart Melek, head of commodity strategy at TD Securities. 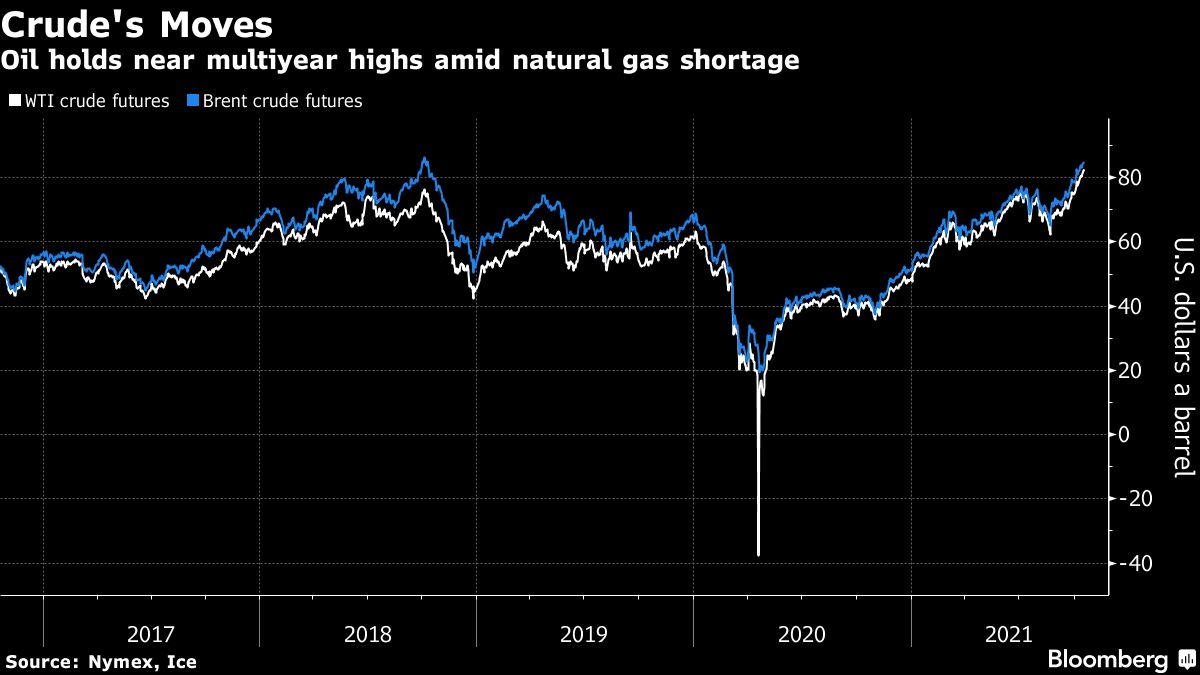 Both the U.S. and global benchmark crudes are trading above US$80 a barrel as shortages of natural gas and coal have driven rising demand for alternative power generation and heating fuels in Asia and Europe ahead of the winter. Brent futures earlier hit the highest intraday level since 2018, while West Texas Intermediate crude neared a seven-year high.

Meanwhile, OPEC and its allies once again failed to pump enough oil to meet their output targets, exacerbating the supply deficit as the world recovers from the pandemic. The group cut its production 15 per cent deeper than planned in September, compared with 16 per cent in August and 9 per cent in July. This reflects the inability of some members -- including Angola, Nigeria and Azerbaijan -- to raise output to agreed volumes due to a lack of investment, exploration and other issues.

Gazprom PSJC, Europe’s biggest natural gas supplier, doesn’t plan to send more gas via key transit routes through Ukraine next month, according to the results of several auctions on Monday. This comes after Russian President Vladamir Putin said that the country was ready to deliver all the natural gas Europe needed, using the energy crisis to capitalize on the country’s position as a natural gas supplier.

“These kind of signals from Russia build on the fear that there might be shortages on natural gas during the upcoming winter season,” said Hans van Cleef, senior energy economist at ABN Amro Bank. “I wonder how much more support is on the cards. After all, the gas to oil switch has only a certain capacity.”

Elsewhere, Iran said that talks about a nuclear deal could last for several more rounds. The OPEC member could increase production by 1.3 million barrels a day if U.S. sanctions were lifted, the International Energy Agency said last week.