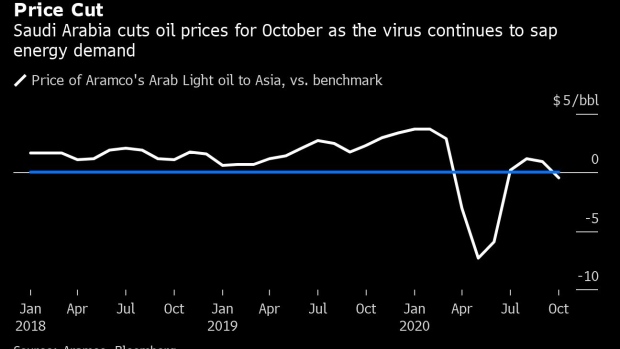 (Bloomberg) -- Oil extended its slide below $40 a barrel after Saudi Arabia cut its pricing for oil sales in October, a sign that the world’s biggest exporter sees fuel demand wavering amid more coronavirus flare-ups around the globe.

Futures in New York fell as much as 2.8%, after dropping almost 4% on Friday. The kingdom’s state producer, Saudi Aramco, reduced its key Arab Light grade of crude by a larger-than-expected amount for shipments to Asia, its main market. It also lowered pricing for U.S. buyers.

Crude is off to a weak start in September as virus flare-ups in some parts of the world threaten a sustained rebound in oil consumption at a time when OPEC and its allies are easing historic output curbs. Still, Russia sees oil prices recovering to average between $50 to $55 a barrel in 2021 as the development of Covid-19 vaccines spurs an economic recovery, Energy Minster Alexander Novak said at the weekend.

The U.S. Energy Information Administration releases its Short-Term Energy Outlook on Wednesday, while the market will also focus on weekly inventories data for evidence that the supply glut continues to unwind. The U.S. market is closed Monday for the Labor Day holiday.