Oil fell ahead of several global interest-rate decisions that are expected to bring further monetary tightening.

The Fed and other central banks from Europe to Asia are expected to deliver interest-rate hikes this week as they seek to tame rampant inflation that’s hit demand. Liquidity thinned, leading to volatile price swings, while a stronger dollar has added to headwinds. Brent crude futures settled near US$91, taking cues from declining equity markets that minimally trimmed losses later in the day.

“Macro-economic pressures from the Federal Reserve set to raise interest rates this week has added pressure back on the US stock market which seems to be capping crude prices,” said Dennis Kissler, senior vice president at Bok Financial Securities. “Near term, prices are vulnerable to the Fed’s rate rises and more Strategic Petroleum Reserve releases scheduled through November.” 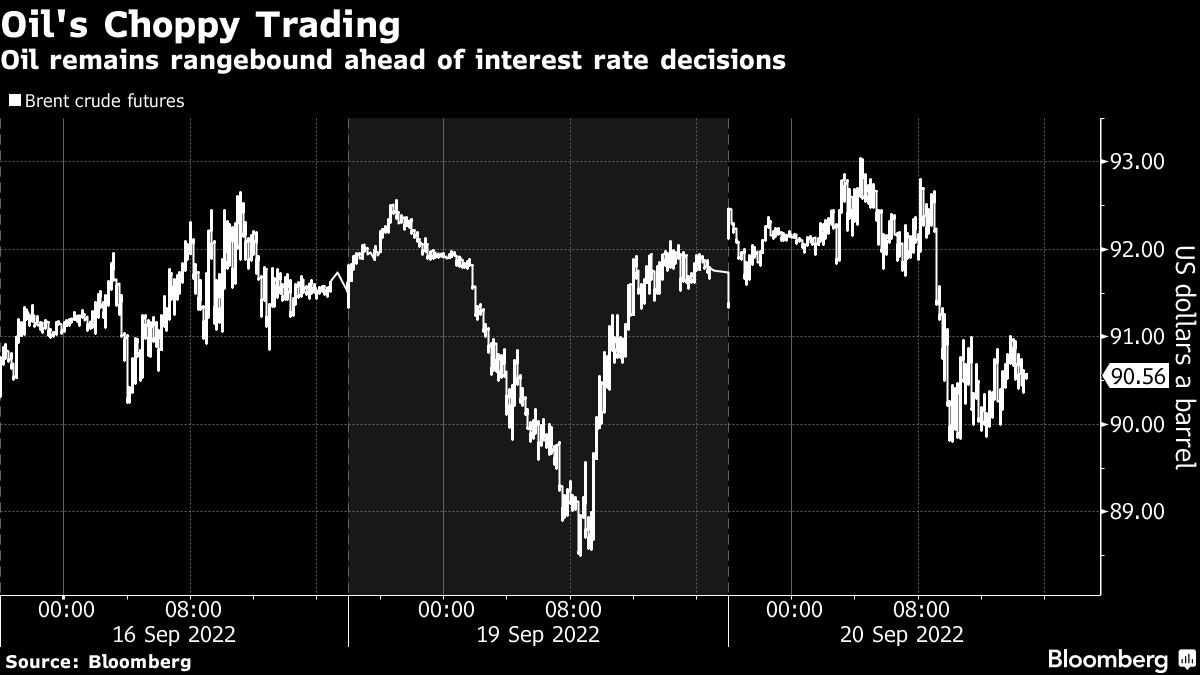 Crude has lost about a third of its value since early June, erasing all the gains made in the wake of Russia’s invasion of Ukraine, amid concerns that a global slowdown will hit demand. The potential for increased supply has also weighed on the outlook. The US said Monday it would offer an additional 10 million barrels of oil from its strategic reserves in November, ahead of plans by the European Union to ban Russian crude in December.

Still, Saudi Aramco warned that when the global economy recovers the world’s spare oil production capacity could be eliminated. The company’s chief executive officer said that by the time the world realizes the issue it may be too late to change course.

Investors also are considering the prospect of higher Iranian crude flows should protracted talks on reviving a nuclear deal reach a conclusion. Discussions on efforts to resurrect an accord on the sidelines of the United Nations General Assembly in New York are “a possibility,” Foreign Ministry spokesman Nasser Kanaani said at a press conference.

Elsewhere, Russia’s seaborne crude exports fell sharply in the first half of September. Crude shipped from its ports dropped by almost 900,000 barrels a day in two weeks, to 2.54 million barrels a day in the week to Sept. 16, from 3.42 million in the seven days to Sept. 2.