Oil extended declines to the lowest in almost six months as weaker US gasoline demand and recessionary fears weighed on markets.

West Texas Intermediate fell 2.3 per cent to US$88.54 a barrel, a level last seen in the weeks leading up to Russia’s invasion of Ukraine. This week’s descent was touched off by government data showing Americans are driving less than they did in the summer of 2020. Fears of an economic slowdown have intensified along with the potential impacts on crude demand.

Prices falling below US$90 a barrel “is quite remarkable given how tight the market remains and how little scope there is to relieve that,” said Craig Erlam, senior market analyst at Oanda. “But recession talk is getting louder and should it become reality, it will likely address some of the imbalance. Just not in the way we’d like.” 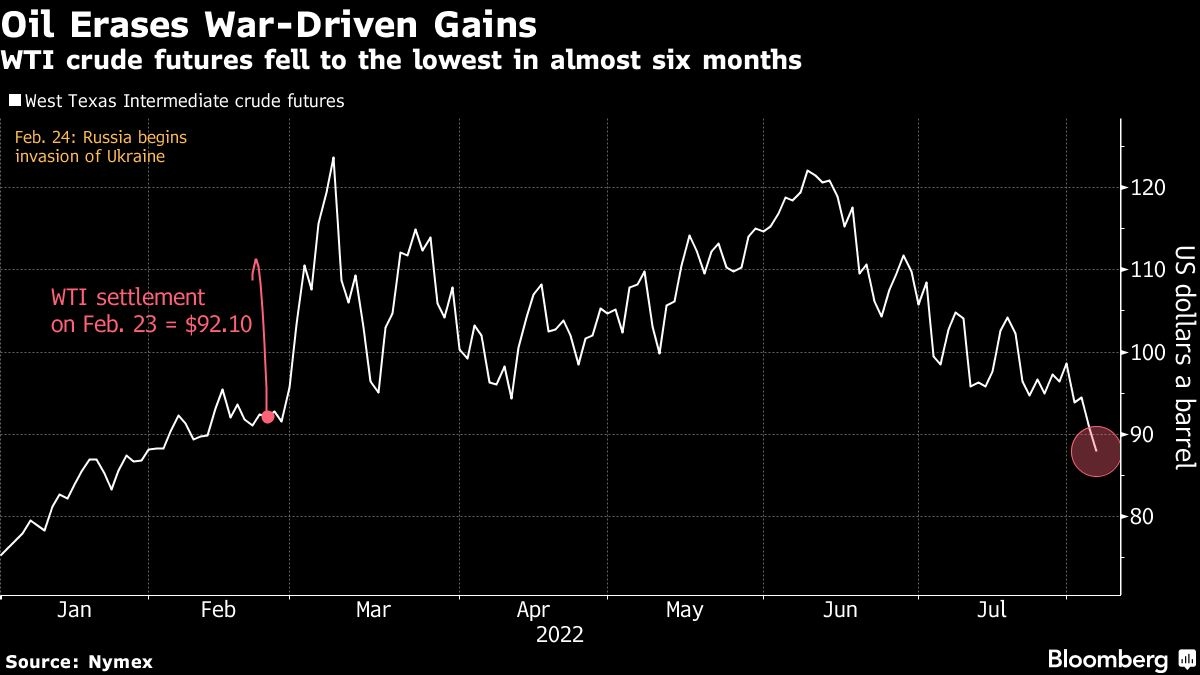 Crude has now given up all the gains triggered by Russia’s invasion of Ukraine in February. Since peaking at more than US$130 a barrel in March, the US benchmark has been dragged lower by signs that Moscow is still getting its cargoes onto the global market and escalating investor concerns that a global slowdown will erode energy consumption.

Despite the recent price weaknesses, Saudi Arabia raised its oil prices for buyers in Asia to a record level, a sign the world’s largest exporter sees the region’s market remaining tight. OPEC+ agreed to boost supply by a meager 100,000 barrels a day in September, while issuing a stark warning on “severely limited” spare capacity.

The oil market continues to be in backwardation, a bullish pattern in which near-term contracts are trading higher than later-dated ones, yet key differentials have narrowed. WTI’s nearest backwardation fell below US$1 a barrel this week for the first time since April, signaling that underlying physical tightness is easing off as the peak summer driving season is coming to an end.

The extremely modest output increase from OPEC+ came despite a visit by Joe Biden to Saudi Arabia last month, when the US president urged producers to add supplies as part of his efforts to rein in high fuel costs. Still, retail gasoline prices have fallen almost US$1 a gallon since hitting a record in mid-June, which will alleviate some of the administration’s political concerns.