The energy market will feel the effects of Russia’s invasion of Ukraine for decades: Strategist

Oil extended its retreat from a seven-year high after the U.S. reiterated its decision not to sanction Russian energy exports.

Futures in New York traded near US$91 a barrel on Friday, falling from its highs of US$100 a barrel earlier in the week. Friday’s pullback came after the U.S. State Department said it won’t sanction Russian crude oil because that would harm U.S. consumers and not Russian President Vladimir Putin. At the same time, the International Energy Agency pledged to help ensure global energy security in the mids of the crisis.

“It seems that the U.S. and its allies want to inflict pain on Russia but do not want to impede their ability to deliver energy products to the world,” said Bart Melek, head of commodity strategy at TD Securities. 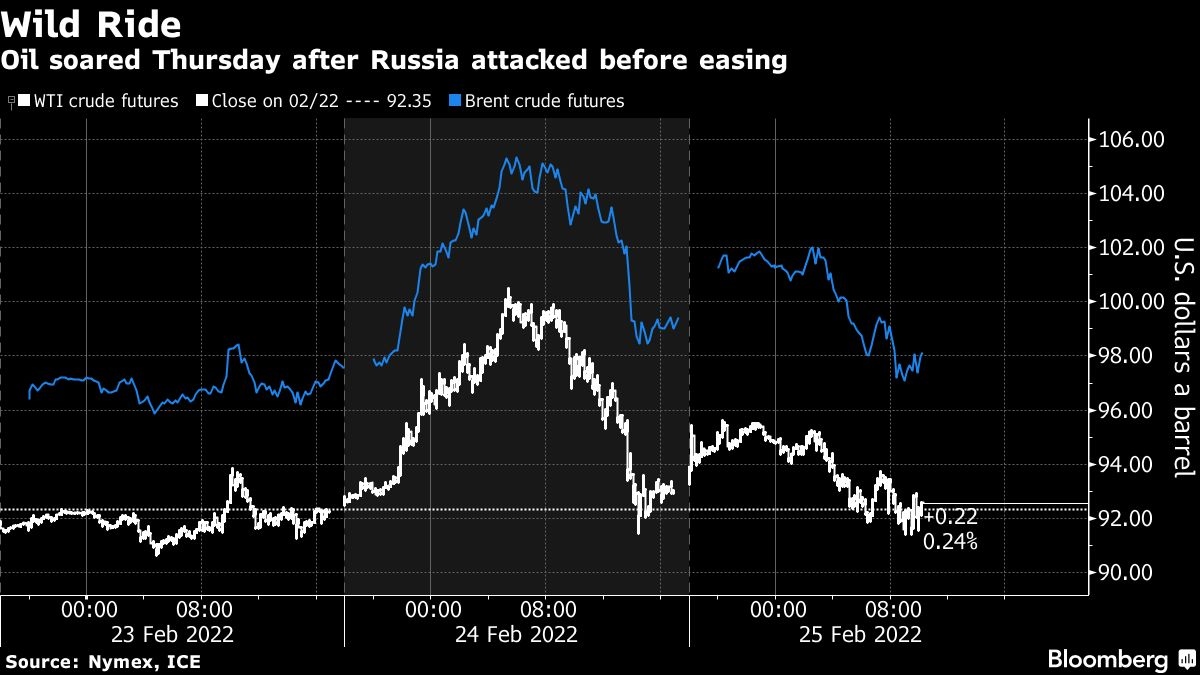 Still, buyers like China have briefly paused purchases of Russia’s flagship Urals grade on concern that the rupture in international relations may yet complicate dealings with Moscow. Urals are now being offered at a discount of US$11.60 a barrel below Dated Brent, the deepest discount in 11 years of data compiled by Bloomberg.

Merchant ships carrying crude oil in the Black Sea have also been thrown into the turmoil of Russia’s invasion. At least two merchant ships have been reportedly hit since Russian forces began the attack on its neighbor this week. Meanwhile, insurers are either not offering to cover vessels, or they’re demanding huge premiums to do so.

In the U.S., President Joe Biden imposed its toughest-ever sanctions on Russia as tanks and troops moved closer to the Ukrainian capital, but said restrictions on currency clearing would include carve-outs for energy payments, a crucial source of revenue for Moscow.

Biden said Russia will not be barred from the Swift international banking network because Europe opposed that action. Despite that, some European lenders are scaling back exposure to Ukraine and Russia in a threat to the credit lines essential to trade.

Russia’s invasion of Ukraine has spooked a global oil market that was already perilously tight due to the inability of supply to keep up with the demand recovery from the pandemic. Biden said the U.S. is working with other major consuming nations on a coordinated reserves release. Any such sales would need to be very large to have a major impact on prices.

Japan and Australia have indicated they may be part of an international release, but China said it had no immediate plans to intervene in oil markets. A spokesperson for Beijing said it would only consider such a move when the geopolitical situation had stabilized. South Korea said it was preparing to take action if there’s a disruption to energy shipments.