Oil fell for the week as lingering concerns over a global economic slowdown overshadowed signs of improving US demand.

West Texas Intermediate futures edged higher Friday in a choppy session but not enough to erase steep losses earlier in the week. Traders reported some pre-weekend liquidation with uncertainty around Iran’s supplies as the European Union and the US look to revive the nuclear agreement. Futures fell to the lowest in seven months earlier in the week as negotiators reported progress on talks between Iran and the EU, while China’s uncertain economic outlook sparked concerns about global demand. 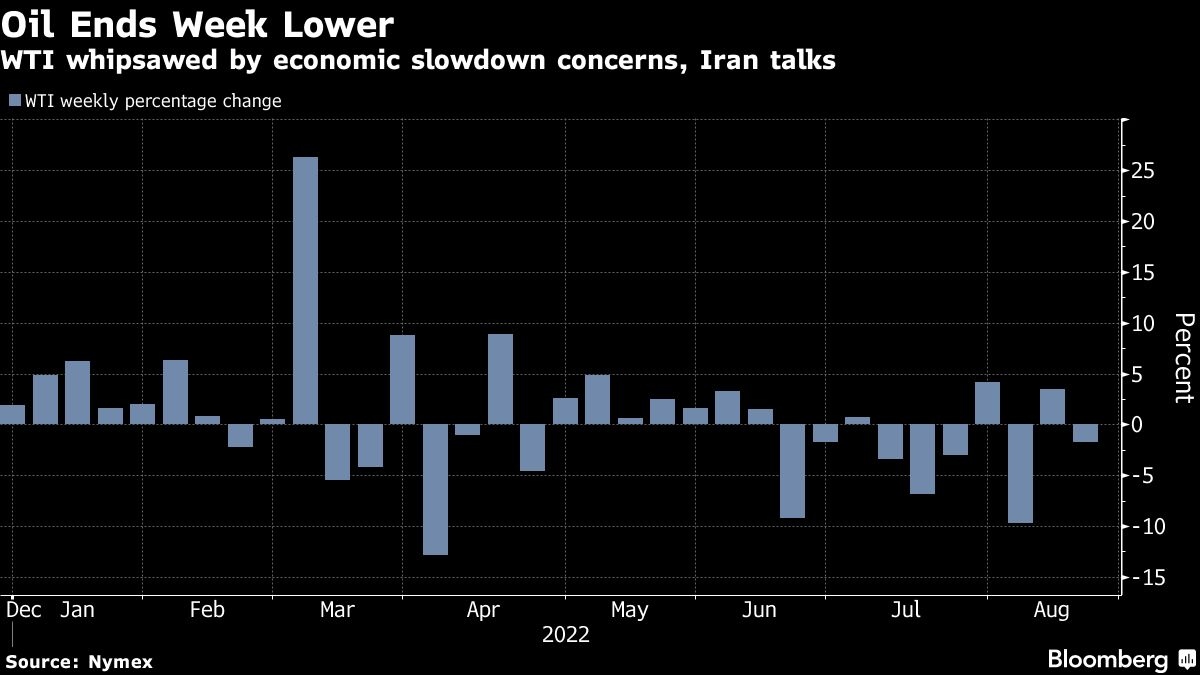 Meanwhile, US gasoline demand is picking up after pump prices tumbled and OPEC’s new secretary-general sounded a warning over “scarce” spare oil-production capacity, but concerns about weakening economic growth around the world continue to daunt the market.  The market is also digesting mixed policy signals from Federal Reserve officials on interest rates.

“We have continued headwinds from the risk of an economic slowdown as central banks continue their efforts to bring down inflation by killing demand through higher rates,” said Ole Hansen, Saxo Bank’s head of commodity strategy. “It looks as if macro has the upper hand over the micro at this stage.”

Despite US and EU sanctions, Russian oil exports are robust, with the country shipping 7.4 million barrels a day in July, according to the International Energy Agency.

Continued Russian exports and weaker than expected demand “should limit the upside in prices,” analysts at ING Bank said in a note while lowering their forecasts for fourth-quarter international crude prices to US$97 a barrel from US$125.

The gap between prompt Brent crude futures and the second month contract -- a measure of the market’s reading of near term supply and demand tightness -- has narrowed significantly recently. The spread was 63 cents a barrel in backwardation, compared with US$2.08 at the start the month.