A lot of crude is itching to come back on market: Lipow Oil Associates president

Futures in New York gained for a second straight session after choppy trading on Wednesday. New York City beaches will open for Memorial Day weekend, highlighting the progress major cities in the world’s largest oil consuming country are making toward a complete reopening.

At the same time, even though domestic gasoline stockpiles rose more than 4 million barrels last week amid a surge in imports, a gauge for demand of the fuel continued its upward trend. The Energy Information Administration report also showed crude inventories fell for a second week, bringing stockpiles to a five-week low.

“It’s a battle for whether we’ll get a full summer driving season,” said John Kilduff, a partner at Again Capital LLC. “It’s going to be a close call, but there’s a bias in favor of there being one given the pace of vaccine rollouts.” 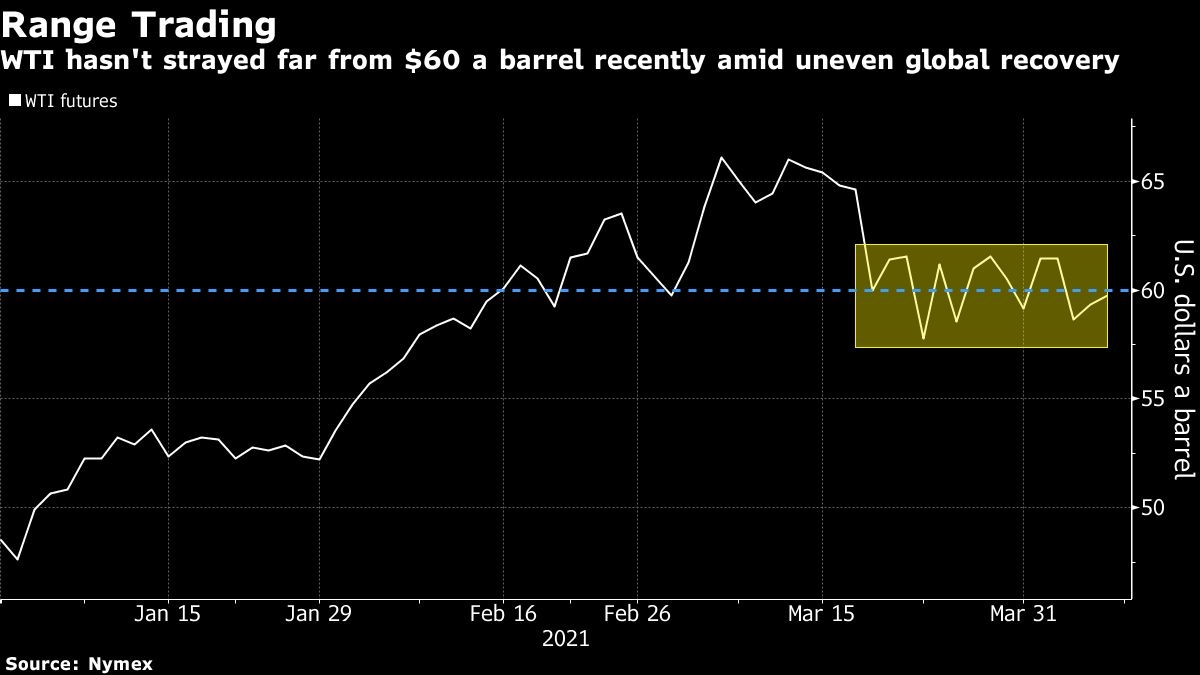 U.S. benchmark crude futures have been stuck in a roughly US$4-a-barrel range since the middle of March as fresh lockdowns in Europe offset stronger demand in the U.S. and China. The four-week average for gasoline supplied in the U.S. -- a proxy for consumption -- ticked up to the highest since September, the EIA report showed. The gauge has increased for each of the past six weeks.

“The U.S. has been making really good COVID progress, while challenges remain in Europe surrounding the vaccine rollout and the spike in cases,” said Brian Kessens, a portfolio manager at Tortoise, a firm that manages roughly US$8 billion in energy-related assets. “If there’s a silver lining, Europe from a lockdown perspective is likely being more aggressive now so that the summer does look that much brighter.”

The spread between Nymex gasoline futures against WTI crude slumped back below US$23 a barrel after the EIA report, with refineries running at the highest capacity since March 2020 and the U.S. importing the most gasoline since May 2019.

Oil prices also found support late in the session as U.S. equities staged a comeback from session lows. Minutes from the latest Federal Reserve meeting show officials see some time before conditions would be met for scaling back its massive asset-purchase campaign.

Investors are also watching for developments on AstraZeneca Plc’s COVID-19 vaccine, with the U.K. now advising those under the age of 30 to be offered an alternative shot if available.

“Oil demand is expected to recover further from the second part of 2021, but these expectations are based on the assumption that enough people will be vaccinated by then to justify the return to normality,” said Louise Dickson, an oil markets analyst at Rystad Energy AS. “The oil market recovery could lose speed, resulting in 2021 demand ending as much as 1 million barrels per day lower than where it would under a smooth vaccine rollout.”

--With assistance from Sheela Tobben and Jeffrey Bair.