I wouldn’t be surprised to see oil pullback below $80 in the coming weeks or months: Allan Small

The global benchmark Brent closed above US$85 a barrel for the first time since October 2018 amid a stronger equity market and ongoing concerns around a worldwide energy crisis.

Brent crude futures eked out a 0.9 per cent gain on Tuesday after a choppy session, while the U.S. benchmark crude closed at a fresh seven-year high. Risk-on sentiment prevailed in the broader markets as equities rose and the U.S. dollar weakened. Meanwhile, Russia signaled that it won’t go out of its way to offer European consumers extra gas to ease supply tightness unless it gets approval for a controversial pipeline.

“Crude price volatility is here to stay as demand uncertainty remains elevated over the short-term,” said Ed Moya, senior market analyst at Oanda Corp. “There is a lot of noise in all this morning’s headlines, but given the relentless winning streak, oil prices are ripe for significant rounds of profit-taking.” 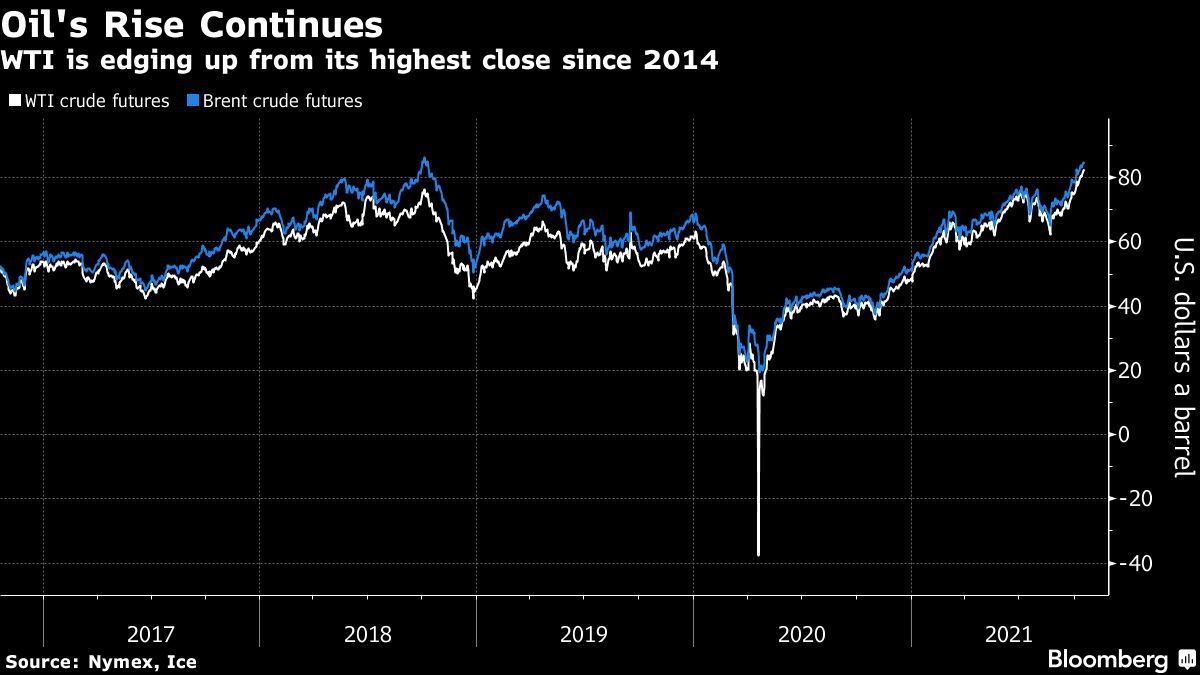 Crude has advanced for the past eight weeks as the energy crisis -- prompted by shortages of natural gas and coal -- coincided with a rebound in demand from key economies emerging from the pandemic. Russia indicated its keeping a tight grip on gas supplies to Europe and OPEC+ hasn’t pumped enough crude to meet its production targets, exacerbating a tight supply situation. It’s “possible” that oil will hit US$100 a barrel this winter, according to commodities trader Mercuria Energy Group Ltd.

In exchange for upping supplies, Russia wants to get German and European Union approval to begin using the Nord Stream 2 pipeline to Europe, according to people close to state-run gas giant Gazprom and the Kremlin. Gazprom PJSC’s gas exports to its main markets fell in the first two weeks of October to the lowest since at least 2014 for the time of year.

Technical indicators are showing that crude is in overbought territory. West Texas Intermediate’s 14-day Relative Strength Index is holding above 70, signaling oil may be due for a pullback.

Meanwhile, in the U.S., analysts surveyed by Bloomberg estimate a crude stockpile gain of 2.25 million barrels last week. The industry-funded American Petroleum Institute will release inventory data later Tuesday, while the U.S. government will release its weekly tally on Wednesday.