Oil climbed by the most in nearly two weeks with the OPEC+ alliance and BP Plc pointing to signs of a robust demand recovery taking shape in parts of the world.

Futures in New York jumped 1.7 per cent on Tuesday. An OPEC+ committee decided this week to move forward with a planned gradual crude production increase, anticipating a strong demand rebound this year, even as coronavirus cases rise in countries such as India. The producer group decided to skip a Wednesday meeting and instead gather in early June.

In the U.S., where a demand recovery is seen outpacing much of the world, President Joe Biden said that he intends to send new vaccines to India. Meanwhile, BP Plc Chief Executive Officer Bernard Looney said China’s oil demand is above pre-pandemic levels.

The market is “in a position now where the optimism is there, but it appears to be heavily priced in,” said Edward Moya, senior market analyst at Oanda Corp. The OPEC+ decision to “skip the ministerial meeting shows that the energy market is in pretty good shape right now. But if new risks emerge, we’ll see how sensitive the market is.” 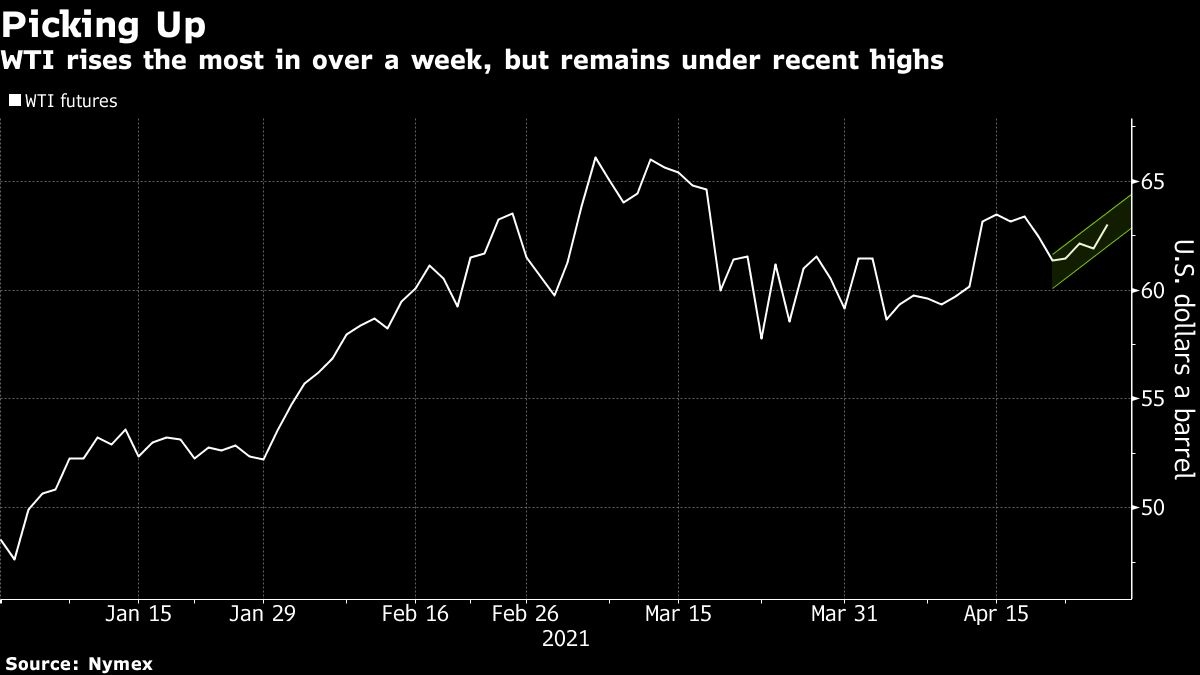 U.S. benchmark crude futures are up more than 6 per cent so far this month amid signs of a consumption recovery in some parts of the world. Russian Deputy Prime Minister Alexander Novak said Tuesday that there is optimism in the global oil market and global mobility is increasing. Meanwhile, shipping giant A.P. Moller-Maersk A/S raised its earnings guidance citing surging demand for its services, underscoring a boom in global trade.

The uneven pace at which the world’s economies are emerging from their pandemic-driven slump has given rise to dislocations in crude flows. Canadian oil sellers have sent exports on rare voyages to the U.S. West Coast this month as the U.S. makes progress in its vaccine rollout. But at the same time, West African crude exports to Asia are poised to drop to their lowest since October as shipments to India slump.

“You’re seeing incredibly strong demand in America and China,” said BP CEO Bernard Looney in a Bloomberg Television interview. “America is almost back to where it was. The vaccines are going to kick in now in Europe. Then of course the question is what happens in the rest of the world.”

Prices pared some of its post-settlement gains after the American Petroleum Institute was said to report that domestic crude stockpiles rose by over 4.3 million barrels last week. If confirmed by the U.S. government’s weekly storage data on Wednesday, that would be the second straight weekly rise in crude supplies.

Gains in U.S. benchmark crude futures on Tuesday outpaced those of its global counterpart. Brent’s underlying market structure softened, with the premium of the nearest contract narrowing against the following month. Meanwhile, the discount of WTI’s front-month contract to Brent’s was the smallest in more than a week.

“The broad expectation in the market here is that North America is going to outperform much of the world, at least over the next quarter or so,” said Bart Melek, head of commodity strategy at TD Securities. “That should see WTI perform somewhat better” on a relative basis to Brent.

Optimism around a global recovery is being driven in part by a strong rebound in China -- although an oil spill outside Qingdao could threaten operations at the country’s biggest crude-receiving terminal. Meanwhile, South Korea’s economy recovered at a stronger pace than expected last quarter, as investment picked up with export growth.