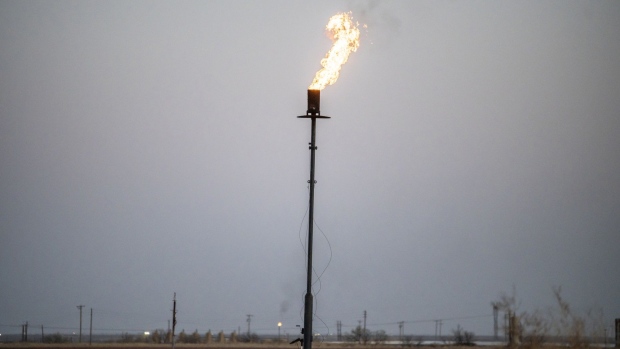 Senator Joe Manchin, a Democrat from West Virginia and chairman of the Senate Energy and Natural Resources Committee, speaks during a hearing in Washington, D.C., US, on Tuesday, July 19, 2022. The hearing is to examine "federal regulatory authorities governing the development of interstate hydrogen pipelines, storage, import, and export facilities." , Bloomberg

(Bloomberg) -- The oil and gas industry would face a first-time fee on the excess emission of methane under a breakthrough spending agreement reached on Wednesday by Senate Majority Leader Chuck Schumer and Senator Joe Manchin.

Methane leaking from oil and gas wells, pipelines and an array of other infrastructure would lead to fees rising to as much as $1,500 a ton in 2026 for some operators, according to the text of the agreement, which is set for a Senate vote as soon as next week.

The legislation which also includes hundreds of millions of dollars in incentives for the industry to monitor and clean up methane leaks, comes amid increasing scrutiny of methane, the primary component of natural gas, which pound-for-pound has more than 80 times the heat-trapping power of carbon dioxide. Reducing emissions of the greenhouse gas is considered crucial in the struggle against climate change.

Any fees would come alongside separate Environmental Protection Agency efforts to limit methane emissions, including proposals to strengthen requirements for companies to find and plug leaks at hundreds of thousands of oil and gas wells.

Overall, the broader deal includes some  $369 billion on climate and energy spending including on a series of new and extended tax credits for clean energy and electric vehicles. It remains unclear whether the deal will be backed by the full Democratic caucus in the 50-50 Senate.

It would also have to pass the House, where progressives sought a much more expansive plan.