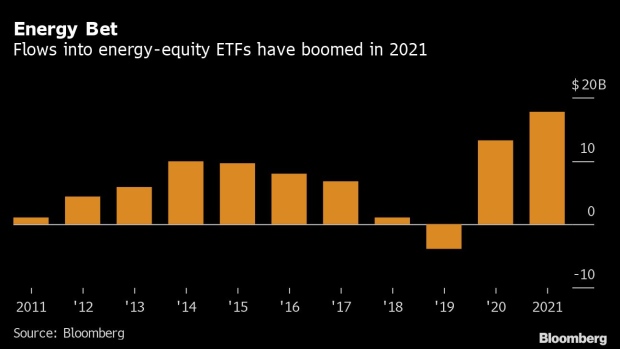 (Bloomberg) -- Money is flowing into exchange-traded funds focused on U.S. oil and gas stocks at the highest rate in a decade, yet another sign of renewed investor interest in the shale industry.

Almost $18 billion has poured into U.S. energy-stocks ETFs so far in 2021, more than in any of the previous 10 years and nearly triple the amount seen in the first half of 2020, according to data compiled by Bloomberg. Over 60% of this year’s inflow has been invested in funds that are heavily focused on fossil fuel companies.

Investors have been lured by the strongest rally in oil and gas prices since 2009, with shale explorers emerging from the pandemic with record cash flows that they’ve pledged to give back to shareholders, rather than spend on growth. It’s a turnaround from years of prioritizing their expansion over investor returns, leading to a fall from grace on Wall Street.

Oil has jumped more than 50% this year as demand is rebounding faster than OPEC+ adds supplies, while U.S. production has remained steady. This week the cartel was unable to reach an agreement on bringing back curtailed output, further tightening the market.

ETFs focused on energy stocks have so far returned a median 43% in 2021, more than any other industry. From Marathon Oil Corp. to Occidental Petroleum Corp., five out of the 10 best performers in the S&P 500 index this year are U.S. shale drillers.

“This is forcing people to catch the rebound with specific energy ETFs,” Athanasios Psarofagis, a Bloomberg Intelligence ETF analyst, said in an interview.

Energy-equity funds have also been a way to bet on oil’s rally, as an alternative to commodity-tracking ETFs such as the United States Oil Fund, which holds crude futures contracts.

Energy Select Sector SPDR Fund, which holds about $25 billion and is heavily exposed to Exxon Mobil Corp. and Chevron Corp, had the biggest inflow among energy-stocks ETFs so far this year. It received double the investment that went into iShares Global Clean Energy ETF, which offers exposure to renewables behemoths including Vestas Wind Systems A/S and NextEra Energy Inc. and had the second biggest inflow so far this year.