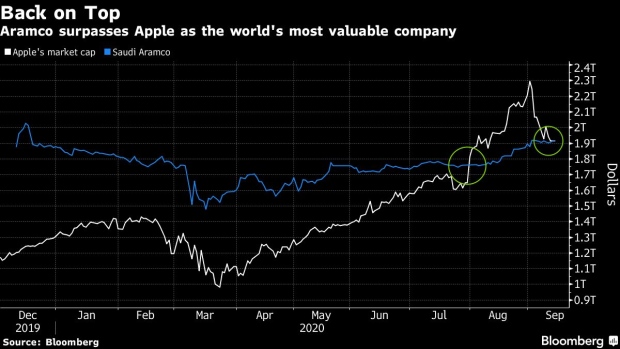 (Bloomberg) -- Saudi Aramco is once again the world’s most valuable company after its market capitalization rose a shade above Apple Inc. amid a slump in U.S. technology shares.

The state oil giant’s stock has gained 1.1% in Riyadh this month, despite Brent crude dropping 12% to below $40 a barrel as concerns about an acceleration in coronavirus infections mount.

Meanwhile, Apple shares have fallen nearly 17% in September. That’s almost taken the stock into bear-market territory -- which is a 20% drop from a recent peak -- and the company’s market value has declined to $1.9 trillion from $2.3 trillion.

Apple and Aramco are the only two companies to have achieved valuations of $2 trillion. Aramco, the world’s largest oil producer, peaked at just above that level in mid-December, shortly after its record initial public offering. Apple overtook it in July as technology firms soared amid massive U.S. monetary and fiscal stimulus to counter the fallout from the virus.

Aramco’s share price has been resilient partly because of its pledge to pay a $75 billion dividend this year. That would be more than five times what Apple’s paid out to shareholders in the past four quarters.