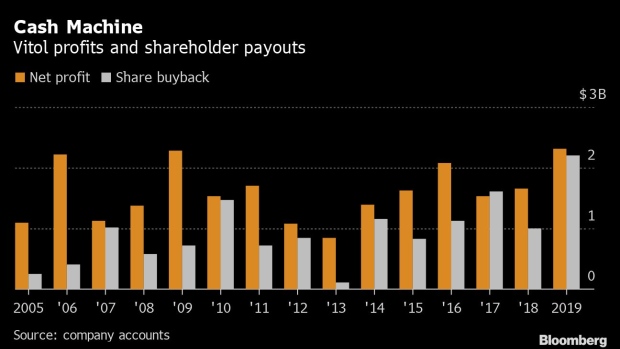 (Bloomberg) -- Vitol Group paid a record $2.2 billion to its executives and staff through share buybacks last year, an unusually large payout that comes as the oil trader undergoes a generational transition in leadership.

The buyback -- Vitol’s main way of rewarding about 350 top employees who own the privately-held company -- means the trading house has distributed a total of more than $14 billion in the past 15 years to its partners, according to the company’s audited annual accounts, seen by Bloomberg News.

The figure highlights how the riches of the commodities trading industry have accrued to a small cadre of senior executives who have surfed the ups and downs of the energy markets over the past two decades. Led by Chief Executive Officer Russell Hardy, Vitol is the world’s largest independent oil trading house.

If it was divided equally, the 2019 payout would be equivalent to more than $6 million per partner, an amount that compares favorably with compensation at leading investment banks. But in contrast to the titans of Wall Street, Vitol remains privately owned.

Vitol has enjoyed strong profits in recent years, a trend that held in 2019 when net income matched the $2.3 billion record set in 2009, according to the accounts. The company earlier this year said that it benefited from higher trading volumes and “relative tightness” in the oil market in 2019, which allowed for fatter margins. Across the industry, other trading houses also reported strong profits in 2019.

Each day, Vitol moves 8 million barrels of crude and petroleum products -- enough to meet the demand of Germany, France, Italy, Spain and the U.K. combined. The company, which operates from offices in London but is ultimately controlled through a holding company in Luxembourg, doesn’t announce its results publicly, but shares them with bankers and others.

Last year’s share buyback was unusually large for Vitol, which historically has paid its partners an amount smaller than the previous year’s net income, allowing the company to build its equity base. But the $2.2 billion it handed to shareholders in 2019 far exceeded the $1.7 billion it made in 2018.

The larger-than-normal payout came at the same time as several of Vitol’s senior partners were making way for a new generation. Long-time CEO Ian Taylor moved to become chairman in 2018, and died earlier this year. Other top executives have also taken a step back from day-to-day operations, including Mike Loya, who ran the Americas business from Houston and left the company earlier this year, and David Fransen, who was head of the Geneva office.

Even as Vitol has notched up large profits, it has come under scrutiny as part of the Brazilian “Carwash” investigations. A former oil trader at the Brazilian state-run oil company told investigators last year he received bribes from the trading house to favor Vitol in contracts from 2003 to 2005. Vitol has denied the allegations and said the company has a “zero tolerance” policy regarding bribery and corruption and is cooperating with the authorities, including the U.S. Justice Department, which is also investigating.

In the past, Vitol has said none of its top partners owned more than 5% as the company bought back enough shares from older partners to limit their holdings. In other trading houses, including Glencore Plc and Trafigura Group, top executives have historically controlled much larger stakes. It’s unclear whether there’s a connection between the unusually large buyback and the changing of the guard at the top of Vitol.

While other commodity trading houses have become public companies, including Glencore, which floated in London in 2011, the partners at Vitol have resisted the temptation of selling out. Based on the price-to-earnings ratios of its publicly traded peers, Vitol could be worth more than $25 billion. The company valued its stockholders’ equity at $11 billion at the end of 2019, little changed from the end of 2018.

The company expects to achieve a “reasonable result” in 2020, according to the directors’ report on its full-year results. Yet, it suffered a sharp fall in profit in the first quarter of 2020, with a 70% drop in net income to $180 million, Bloomberg has previously reported. The company failed to fully anticipate the deep drop in fuel demand caused by the coronavirus pandemic, a person familiar with the matter said said at the time.