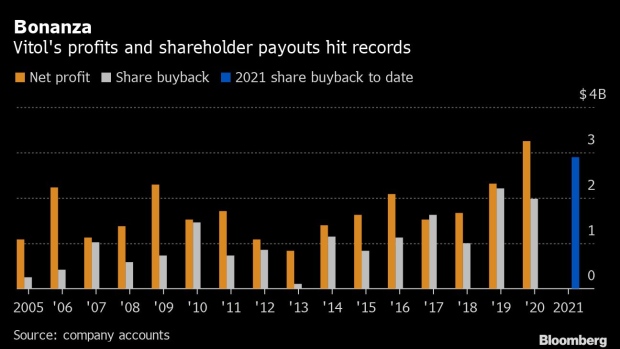 (Bloomberg) -- Vitol Group has paid a record $2.9 billion to its executives and staff through share buybacks so far this year after the world’s largest independent oil trader notched up its best ever results in 2020.

The share buyback -- Vitol’s main way of rewarding about 350 top employees who own the privately-held company -- means the trading house has distributed a total of nearly $19 billion in the past 17 years to its partners, according to the company’s audited annual accounts, seen by Bloomberg News.

The results highlight the bonanza enjoyed by commodity traders in the midst of the coronavirus pandemic as oil prices gyrated wildly. They also show how the riches of the commodities trading industry have accrued to a small cadre of senior executives who have surfed the ups and downs of the energy markets over the past two decades.

The $2.9 billion buyback carried out so far this year is on top of $2 billion of share buybacks in 2020 according to the accounts. The previous record for Vitol’s annual buyback was $2.2 billion in 2019.

If it was divided equally, the 2021 payout would be equivalent to more than $8 million per partner, an amount that compares favorably with compensation at leading investment banks. But in contrast to the titans of Wall Street, Vitol remains privately owned.

Other top executives including Mike Loya, who ran the Americas business from Houston, and Kho Hui Meng, who was head of Asia, retired in 2020.

Vitol’s 2020 net profit of $3.2 billion far exceeded its previous record of $2.3 billion, which it achieved in 2009 and 2019. It came as the company in December agreed to pay just over $160 million to regulators in the U.S. and Brazil after admitting to having bribed government officials for more than a decade.

Vitol made a significant chunk of its profits during the second quarter, when oil demand collapsed, allowing traders to buy cheap crude and store it, while locking in a profit by selling forward the oil on the futures market at higher prices.