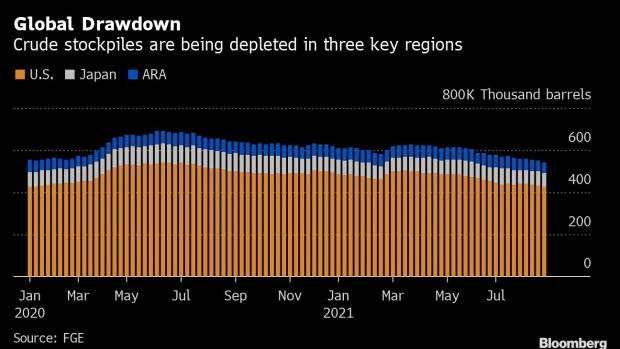 (Bloomberg) -- Global crude inventories that ballooned during the pandemic have shrunk to the lowest level in 20 months as an economic rebound in top consumers China and the U.S. drive a robust recovery in fuel demand.

About 2.97 billion barrels of crude oil were stored onshore globally as of Sept. 5, the least since January 2020 before Covid-19 eviscerated demand, according to data analytics firm Kayrros. U.S. stockpiles are at a two-year low, those in China are the smallest since September 2020, while inventories at the African hub of Saldanha Bay are at the lowest since April last year.

Oil consumption in the world’s top guzzlers has surpassed pre-pandemic levels and underpinned a red-hot rally in crude prices, although it’s faltered over the last couple of months due to the delta variant of the virus. China’s depleted inventories also have some in the market predicting that the biggest crude importer will start replenishing its giant reserves again soon.

“There was really a surge in crude oil demand, especially in the first half of this year,” said Victor Shum, vice president of energy consulting at IHS Markit. However, he predicted that the draw-down of inventories will slow as OPEC+ pumps more, and that demand surges are “probably turning a corner.”

Global inventories swelled in July last year to the highest level since Kayrros started compiling its data in May 2016. Since then, there’s been a steady drop across most regions. Onshore storage in Europe and the Middle East are about 28-to-35 million barrels lower than a year earlier, according to Kayrros.

See also: Oil Stored in South Korea Now Less Than Half of Peak in 2020

U.S. stockpiles may decline even further if production halted by Hurricane Ida resumes slower than the return of refining capacity, said Sri Paravaikkarasu, head of Asia oil at FGE. The Category 4 storm swept through the Gulf of Mexico and crashed into the coast two weeks ago.

Higher crude prices have also encouraged refiners to tap more stored oil, while a bullish backwardation structure has made it uneconomical for traders to hoard crude. China recently took the unprecedented step of offering crude reserves to domestic processors to try and cool prices.

The Asian giant’s crude stockpiles were at about 966 million barrels on Sept. 5, the lowest since September 2020, although still around 100 million barrels above pre-pandemic levels, according to Kayrros. Another satellite tracker, Ursa Space Systems, which uses a slightly different methodology, estimates inventories are near the smallest since June 2020.

Chinese inventories were mostly depleted by domestic and international traders who had supplied local independent refiners, according to Sengyick Tee, an analyst at Beijing-based SIA Energy. The private refiners, known as teapots, account for about a quarter of China’s oil-processing capacity.

“China will have to buy crude soon,” analysts Amrita Sen and Yuntao Liu at Energy Aspects Ltd. wrote in a Sept. 9 note. “This is playing out now.”