Three reasons to be bearish on oil prices

Oil is en route to a third weekly loss as mounting evidence of an economic slowdown overshadows supply-risk concerns.

West Texas Intermediate futures traded near US$85 a barrel, with a slight daily gain unable to overcome larger losses earlier this week. Hotter-than-expected inflation figures fanned expectations that more interest-rate hikes will crimp growth, while a warning from FedEx Corp. Friday was seen as proof that the US economy has started slowing.

“This was the week that energy traders started to believe that the US economy is headed for a rough patch,” said Ed Moya, senior market analyst at Oanda. “Global recession fears are becoming the consensus view and that is troubling for the short-term crude demand outlook.”

Nonetheless, the potential for more supply disruptions from Russia remains a risk, while China’s economic data suggested stimulus measures there were having some success ramping up demand. Taken together with OPEC’s recent moves to support prices, traders said they see US$85 a barrel as basic footing for the oil market. 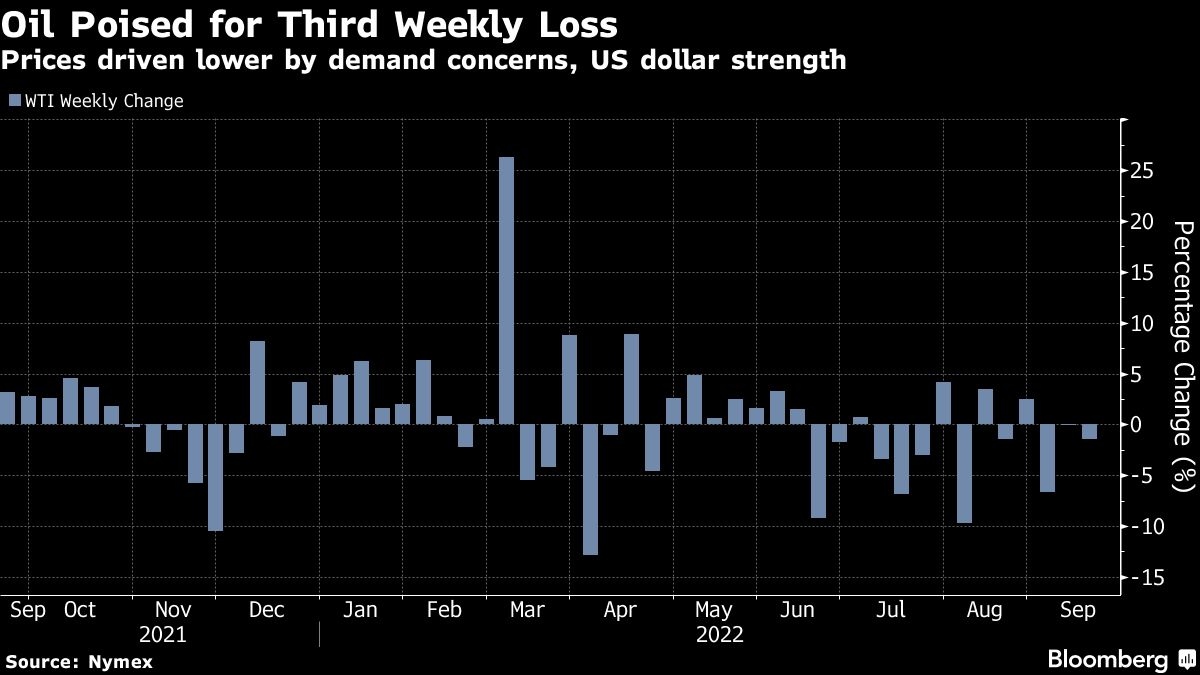 Global oil consumption is being threatened by a darkening economic outlook. A hawkish US Federal Reserve, the risk of a recession in Europe due to a severe energy crisis, and China’s continued Covid-19 lockdowns are all adding pressure to the commodity. Diesel prices -- often correlated to the global growth outlook -- have slumped this week and several banks have cautioned on the outlook.

Also restraining oil price gains, the Bloomberg dollar gauge traded near a record this week on the outlook for tighter monetary policy. A rising greenback makes commodities more expensive for buyers outside of the US.

Despite the more ominous economic picture, Russian supply disruptions remained a wildcard in oil markets. In an effort to stave off a looming energy crisis this winter stemming from curtailed Russian flows, Germany seized the local unit of Russian oil major Rosneft PJSC, including stakes in three refineries.

One of the plants, PCK Schwedt, is now preparing for potential retaliation from Russia such as short-term restrictions in the crude supplied via the Cold War-era Druzhba pipeline.