Energy will be resilient for the coming months, loonie to follow: Economist

Brent crude climbed above US$85 a barrel in London for the first time since 2018, the latest milestone in a global energy crisis that has seen prices soar.

The global benchmark crude passed the key level in intraday trading on Friday. U.S. crude futures are set for an eighth weekly gain, the longest run of advances since 2015. The shortage of gas and coal is triggering extra demand for oil products from the power market, and some banks expect the switch to boost prices further during winter in the northern hemisphere. It’s also starting to deplete stockpiles: the biggest U.S. storage hub at Cushing recorded this week an unusually large supply decline for this time of year.

Meanwhile, the U.S. said it will open its borders to vaccinated foreign travelers next month, further signaling the potential for even stronger demand as economies rebound from the pandemic. 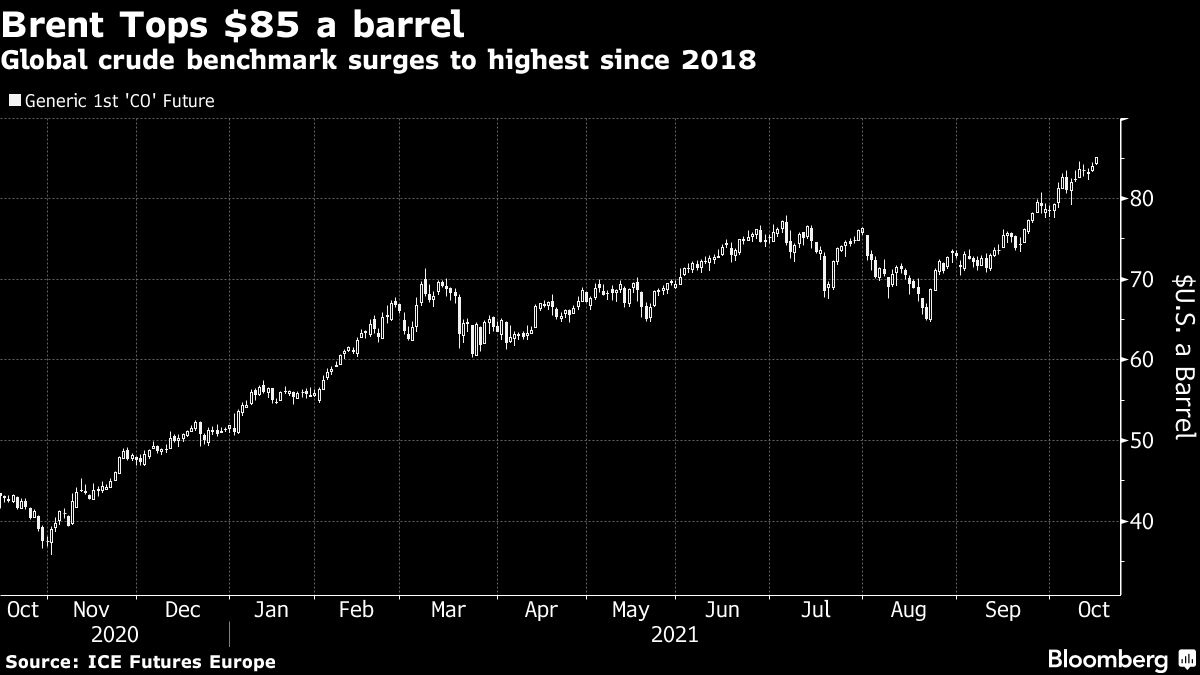 Crude has advanced this month in the wake of robust demand and limited supply. China also issued a long-awaited new batch of quotas for its private refiners to buy more crude, further pushing up consumption. Yet, Saudi Arabia’s Energy Minister Prince Abdulaziz bin Salman reiterated this week the need for OPEC and its allies to take a gradual, phased approach to restoring output.

Prices will likely be “supported with demand rising by switching in the power sector and OPEC+ sticking to a prudent approach in bringing back supply,” said Giovanni Staunovo, commodity analyst at UBS Group AG. Commercial oil inventories are at their lowest since 2015 in OECD countries, and are likely to fall further, he said.

Meanwhile, the gasoline crack spread, a rough measure of the profit from refining crude into fuel, rallied to above US$21 a barrel, the highest since mid-August.

The price surge, including for other energy commodities and metals, is adding to concerns of policymakers about consistently high inflation. Copper has jumped back above US$10,000 a ton as inventories tracked by the London Metal Exchange fell to the lowest since 1974, while zinc hit a 14-year high. Benchmark natural gas in Europe fell but is heading for a weekly gain.