We are in a global oil supply deficit that will get worse before it gets better: Global energy economist

Oil fell from a fresh seven-year high as equities wavered and the dollar’s strength weighed on the commodity.

Futures in New York slipped 0.9 per cent. Oil has rallied most of this week with physical supplies appearing extremely tight. Key swaps tied to the North Sea market are trading at their firmest since 2019, while timespreads are trading at their strongest level since November. Despite the underlying strength, the market wasn’t immune to the whipsaw movements buffeting most major assets.

“This afternoon’s oil weakness was primarily a function of a soaring U.S. dollar that the oil market could no longer ignore,” said Ryan Fitzmaurice, a commodities strategist at Rabobank. But as it stands, fundamentals in oil balances are tight, so even a small escalation in the Ukraine/Russia conflict could result in an oil supply shock for Europe, he added.

Traders are tracking events in Ukraine on concern that Russia may launch an invasion after massing thousands of troops on the border, potentially disrupting energy supplies. Moscow has denied it plans to invade, but Citigroup Inc. said a rise in crude volatility is a sign that the market is pricing in an increased political risk premium, potentially of at least US$5 a barrel. 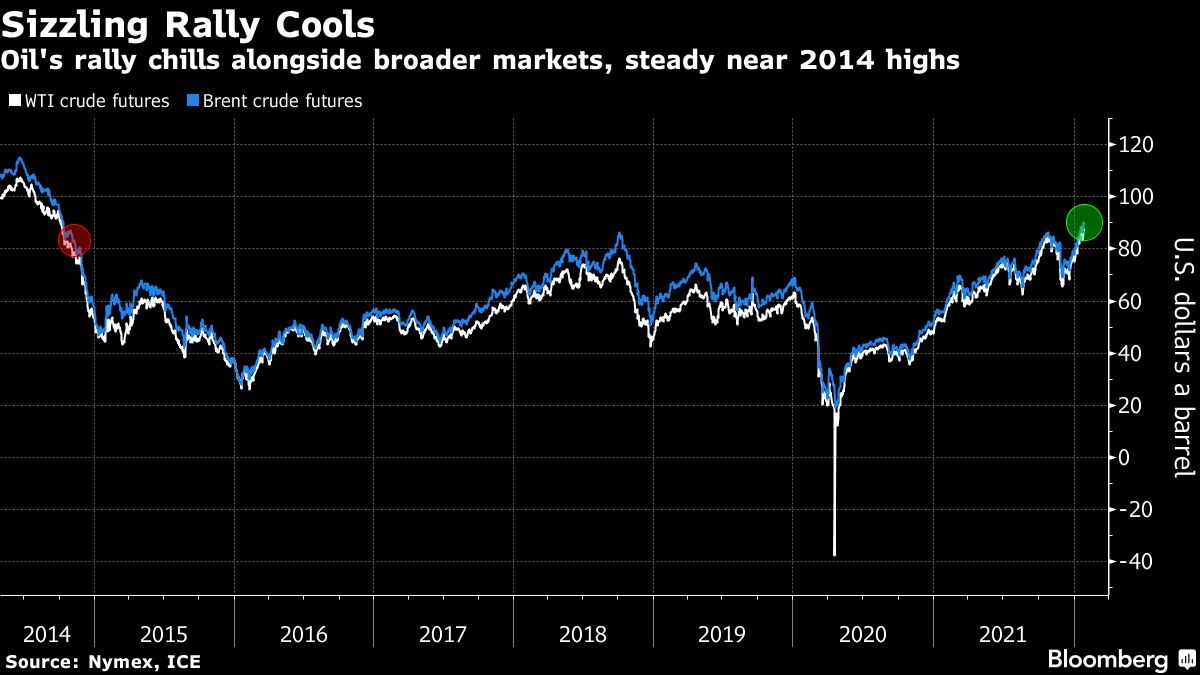 Oil has rallied in the opening weeks of 2022 on the continued recovery in energy consumption from the ravages of the coronavirus pandemic. With global demand coming in stronger than expected and growing concerns about how much further producers will ramp up output, stockpiles at some key hubs have been waning early in the year. The rally in crude prices is coming as the global economy contends with rampant inflation.

As supplies remain constrained, market participants will focus their attention on the OPEC+ meeting set for next week. The coalition, which includes Russia, will get a chance to weigh in next week when they meet Feb. 2. The Organization of Petroleum Exporting Countries and its allies will probably rubber-stamp a hike of 400,000 barrels a day for March, according to delegates.

“OPEC+ underperformance and inaction support elevated oil prices as the group has underdelivered against its stated production targets by hundreds of thousands of barrels and has committed to a passive role in the conversation despite external pressure, primarily from the U.S., to increase production and ease fuel prices,” said Louise Dickson, senior oil markets analyst at Rystad Energy.