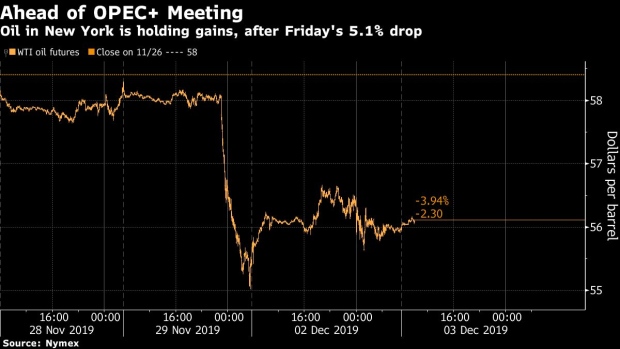 (Bloomberg) -- Oil held gains as OPEC crude output dropped before the group and its allies meet this week to set the path for future production cuts.

Futures added 0.3% in New York even as Asian stocks slumped following the announcement of fresh tariffs by President Donald Trump. Output from the Organization of Petroleum Exporting Countries slipped by 110,000 barrels a day last month, according to data compiled by Bloomberg, while analysts forecast U.S. crude fell last week for the first time since mid-October.

Crude has climbed since early October on signs the U.S.-China are close to a breakthrough on an initial trade deal. Iraq said on Sunday that OPEC+ may consider deepening output cuts, contrary to expectations, while Saudi Arabia has signaled it will no longer tolerate cheating by other members on quotas.

“If the group extends the current plans without making deeper cuts, prices are likely to retreat to near $50 a barrel,” Kim So Hyun, a commodities strategist at Daishin Securities Co., said by phone in Seoul. “OPEC+ doesn’t seem like it’s going to make a further cut in its agreed output.”

Brent for February settlement gained 19 cents, or 0.3%, to $61.11 a barrel on the London-based ICE Futures Europe Exchange. The contract added 43 cents to close at $60.92 on Monday. The global benchmark crude traded at a $5.01 premium to WTI for the same month.

To contact the reporter on this story: Heesu Lee in Seoul at hlee425@bloomberg.net