Oil rose the most in a week as investors see strong demand growth that should continue to whittle down oil supplies following positive signals from broader markets.

Futures in New York rose 1.7 per cent on Thursday as equities climbed toward all-time highs. While U.S. gross domestic product growth missed forecasts in the second quarter, household spending jumped by the most decades, underscoring the demand for oil and other commodities to support the supply chain. Oil was also supported by a weaker dollar, which boosts the appeal of commodities priced in the currency.

“Almost unequivocally, we have a fairly robust increase in risk appetite across the board,” said Bart Melek, head of commodity strategy at TD Securities. “That’s certainly rallying things up.” 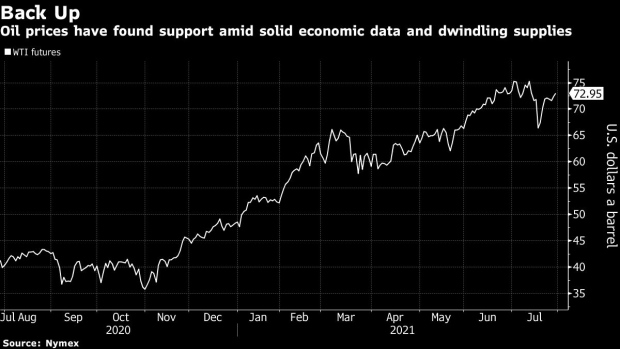 Oil has been volatile throughout July and is headed for its second monthly loss since October amid price pressure from new OPEC+ output and the resurgence of COVID-19. While the fast-spreading delta variant has led to renewed restrictions in some regions, the global market is still expected to be tight through the end of the year.

“Delta is an issue, but not the issue because you’re not seeing further shutdowns just yet,” said Rob Haworth, senior investment strategist at U.S. Bank Wealth Management. “We see that even here when we’re talking about renewed mask recommendations, not mandates.”

More restrictions in Asia have impacted road traffic. Congestion remains significantly below normal in Kuala Lumpur, Bangkok, Jakarta and Singapore as governments have imposed various levels of lockdowns, according to a report by BloombergNEF oil analyst Luxi Hong.

Meanwhile, investors are also keeping an eye on commentary from the U.S. oil industry, which reports earnings this week. While companies have maintained discipline and focused on returns for shareholders, higher oil prices could encourage increased output.

“It’s a matter of when, not if, before we see more of a supply response in the U.S.,” said Haworth.