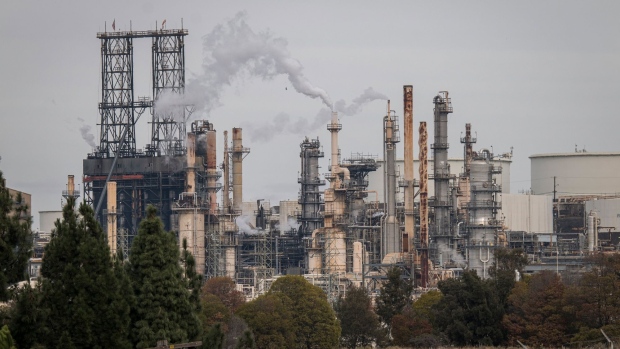 A Phillips 66 refinery in Rodeo, California, U.S., on Wednesday, Nov. 11, 2020. Phillips 66 is preparing the San Francisco area refinery into one of the world’s largest renewable fuel plants with operations starting as early as 2024, producing more than 680 million gallons annually of renewable diesel and gasoline. Photographer: David Paul Morris/Bloomberg , Bloomberg

(Bloomberg) -- Oil held gains near the highest level since early September in Asian trading as signs that Covid-19 vaccinations in the U.S. could be underway within three weeks improved the demand outlook.

Futures in New York traded near $42 a barrel after capping their third straight weekly gain. Vaccinations will “hopefully” start as soon as Dec. 11 or Dec. 12, Moncef Slaoui, head of the American government’s Operation Warp Speed vaccine acceleration program, said on CNN on Sunday.

Optimism that relief from the pandemic is in sight has pushed oil higher in recent weeks, with the market looking past surging infections and more lockdown measures across Europe and the U.S. Pfizer Inc. and BioNTech SE requested emergency authorization for their vaccine on Friday and Moderna Inc. released positive interim results from a final-stage trial and said it’s close to seeking emergency authorization.

Expectations that OPEC and its allies will agree to delay plans to add an extra 2 million barrels per day of output from January have also buoyed crude, with a decision due at a meeting at the end of the month.

The market optimism is being reflected in futures curves. Timespreads for WTI and Brent are moving closer to backwardation -- where near-term contracts are more expensive than later-dated ones -- an indication that concerns over a glut have eased.

Abu Dhabi, meanwhile, said it will invest 448 billion dirhams ($122 billion) in oil and natural gas over the next five years as it seeks to raise production capacity, even while OPEC restricts its output.