Oil rallied after a report that Russia will advocate for OPEC+ nations to cut production, heightening supply concerns as deadlines to implement Russian fuel bans approach.

West Texas Intermediate rose 2.3 per cent to settle above US$78 a barrel. Futures earlier rose almost 4 per cent after Reuters reported Russia is expected to push for production cuts at OPEC’s next meeting. A strengthening dollar and a reminder from Federal Reserve members that more rates hikes are likely in order to slow inflation tamped down the rally.

Supporting crude’s gains were technical gauges indicating that WTI hit oversold territory yesterday when it fell below US$77. Additionally, the market is keeping an eye out for potential disruptions in the Gulf of Mexico as operators shut platforms ahead of Hurricane Ian.

These factors, however, are still of “secondary importance” to the dollar, said Robert Yawger, director of the energy futures division at Mizuho Securities USA. “The market is still going to have a rough time trading strongly to the upside unless we get a break in the rally in the dollar.” 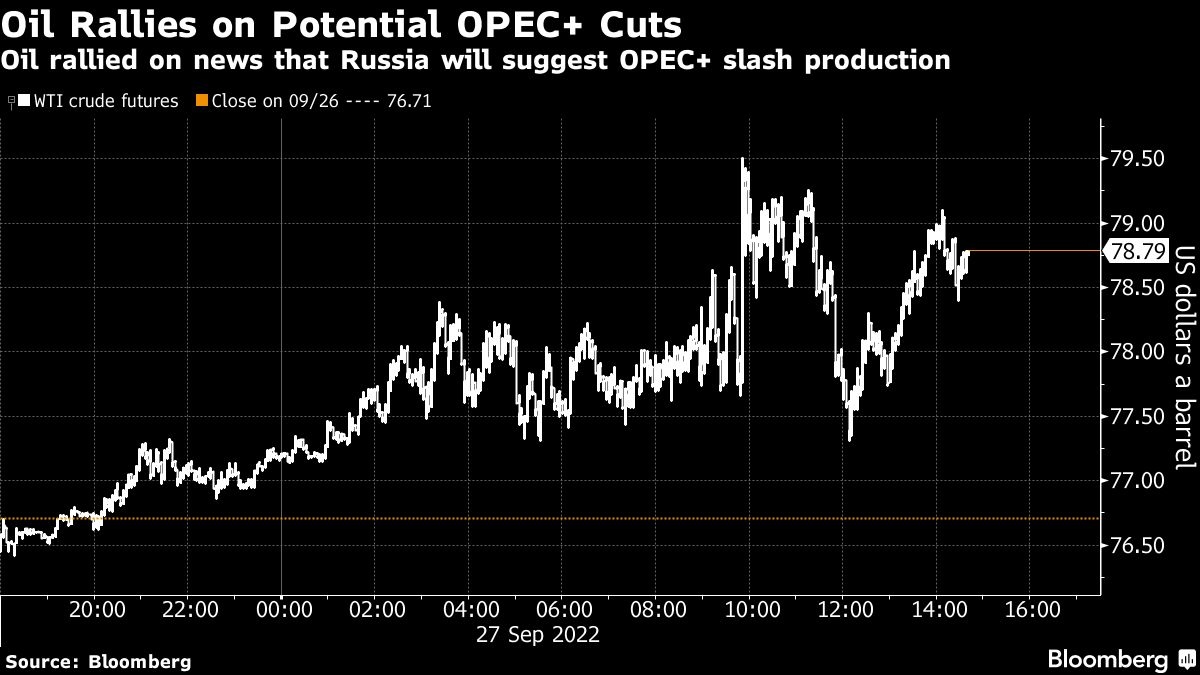 The U.S. oil benchmark remains on track for its first quarterly loss in more than two years on concern that energy consumption will fall, as an aggressive round of central bank rate hikes menace global growth. Some analysts have said the slump may spur the Organization of Petroleum Exporting Countries and allies to consider paring supply.

UBS and JPMorgan Chase & Co. are among those in the industry that have called on OPEC+ to make supply cuts, which would help stabilize oil markets. Meanwhile. Goldman Sachs Group Inc. slashed its oil forecasts as markets price in a major hit to the global economy.

“A strong USD and falling demand expectations will remain powerful headwinds to prices into year-end,” Goldman analysts including Damien Courvalin wrote in a report. “Yet, the structurally bullish set-up -- due to the lack of investment, low spare capacity and inventories -- has only grown stronger, inevitably requiring much higher prices.

Top traders have also indicated wariness about the recent price pullback. Trafigura Group’s chief economist said commodity markets are potentially moving from cycles to a world of price spikes instead amid sustained underinvestment and a lack of spare capacity.

However, a parade of Federal Reserve policy makers signaled on Monday that further rate increases are in store, with the need to tame inflation coming at the cost of a slowdown. Among them, Fed Bank of Cleveland President Loretta Mester said that officials will need to keep restrictive policy in place for longer.