Oil eked out a gain as research indicated that existing COVID-19 vaccines are effective against the new virus variant, quelling fears of plunge in fuel demand, while U.S. crude supplies fell slightly.

Crude prices have rebounded after falling into a bear market last week as nations began implementing lockdowns in response to the omicron variant, stoking concern about the impact to fuel demand. But so far, data show little sign of a significant hit to oil consumption, and OPEC+ has kept a floor under prices by keeping the door open to a possible reversal of its planned supply hike.

“Cautious optimism is prevailing that the hit from omicron on the global economy and thus energy demand will be less than initially feared,” said Stephen Brennock, an analyst at brokerage PVM Oil Associates Ltd. 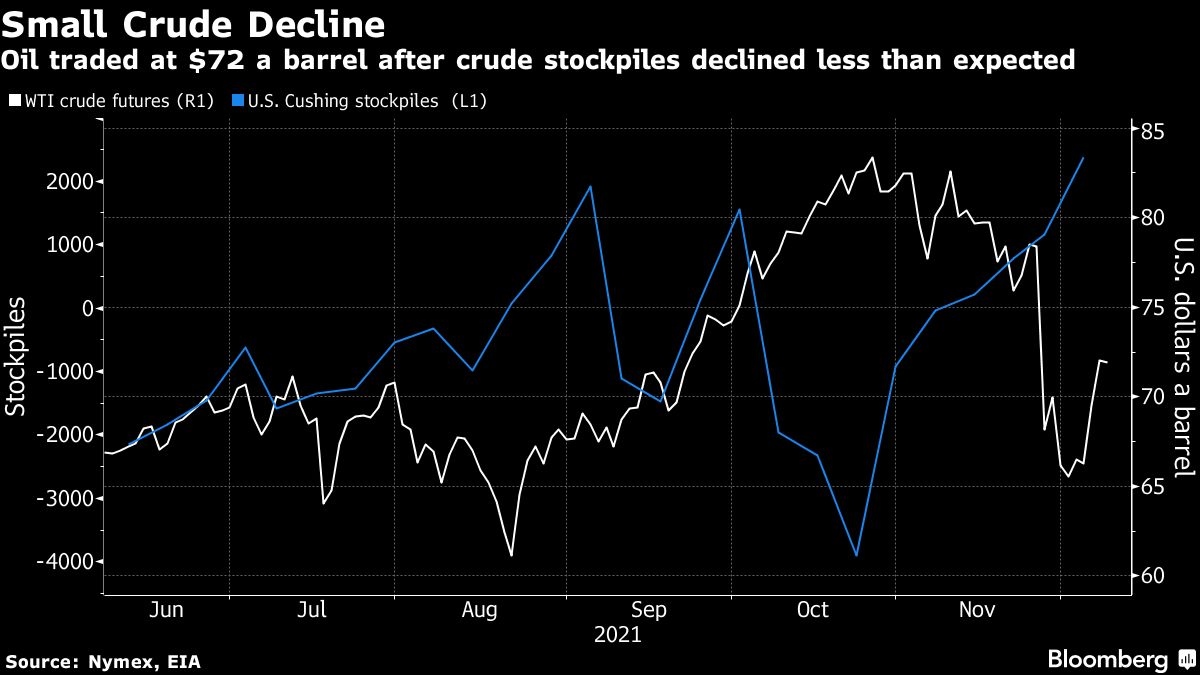 China continues to tackle sporadic outbreaks, with one eastern city locking down a district to curb the spread. Omicron has led to some restrictions on air travel, and researchers in South Africa said the strain’s ability to evade vaccine and infection-induced immunity is “robust but not complete.”

Crude stockpiles rose by 2.3 million barrels at the biggest U.S. storage hub at Cushing, Oklahoma, the most since February, according to the U.S. Energy Information Administration. Gasoline inventories climbed by 3.88 million barrels.

For Cushing, “a number over two million is never good” for the energy market, said Bob Yawger, director of the futures division at Mizuho Securities USA. Inventory declines at Cushing in October and early November helped propel oil to multi-year highs, and the reversal of that trend means the prospect of futures reaching those levels again in the short term has “basically evaporated.”

Over the past week, some traders have bet on the small chance that WTI’s discount to Brent will surge past US$10 a barrel next year. The long-shot wager is a signal that some market participants believe the Biden administration could intervene in the market again to bring down prices following a pledge to sell crude inventories from strategic reserves.