Oil jumped by the most in more than two weeks amid a weaker dollar and as key timespreads surged with expectations for further supply declines at the biggest storage hub in the U.S.

Futures in New York climbed as much as 2.9 per cent on Monday and Brent crude neared the key, psychological US$75-a-barrel mark. U.S. equities rose and the dollar dipping, boosting the appeal of commodities priced in the currency. Investors are watching commentary from Federal Reserve officials this week after St. Louis’s James Bullard said interest rates may need to rise in 2022.

U.S. time spreads strengthened, indicating tighter supplies. West Texas Intermediate crude’s prompt spread -- a gauge of market health -- moved into the deepest backwardation structure since about 2018 on Monday. Spreads further along the curve rallied to the strongest in about seven years.

Data-provider Genscape Inc. reported a 2.6 million-barrel-drop in Cushing, Oklahoma, stockpiles last week, according to people with knowledge of the report. Supplies at the hub are already at the lowest since March 2020. 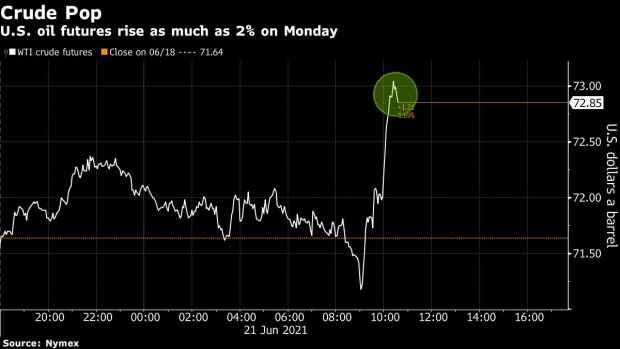 "The stars have aligned here in favor of the bulls in a big way," said John Kilduff, a partner at Again Capital LLC.

U.S. crude futures are up more than 10 per cent so far this month as major economies emerge from restrictions and lockdowns after the rollout of COVID-19 vaccinations. Consumption has rebounded, especially in the U.S., Europe and parts of Asia. By August, global oil demand may exceed the record 100.8 million barrels a day reached in August 2019 due to pent-up demand for leisure activities, according to Citigroup Inc. Meanwhile, Bank of America Corp. said futures may hit US$100 a barrel next year.

"With continued expectations of fairly significant rebound in demand in the second half and a very well-disciplined OPEC+, it looks like, at least for the time being, we’re probably going to get more tightness," said Bart Melek, head of commodity strategy at TD Securities.

Beyond WTI’s prompt spread, other calendar spreads also rallied, signaling longer-term strength. WTI’s September contract is trading more than US$1 above its October contract, the strongest since about 2014.

Traders are also watching the status of discussions between Iran and other nations. So far, nuclear talks have been inconclusive between world powers and Iran -- which has elected a new hardline president -- allaying prospects for a swift revival of the Islamic Republic’s crude exports.

Diplomats adjourned a sixth round of meetings with significant gaps remaining to mend the Iranian nuclear accord, the third time since talks began in April that negotiators have missed self-imposed deadlines to rejuvenate the agreement. Ebrahim Raisi, the president-elect, also ruled out a meeting with U.S. President Joe Biden.

The failure to clinch a deal puts additional pressure on other members of the OPEC+ coalition, which meets next week to consider restoring more oil output.

--With assistance from Grant Smith and Sharon Cho.