Oil rallied for a third day after OPEC+ agreed to the largest supply cut since 2020 and Russia warned it may reduce its own output even further.

West Texas Intermediate futures settled close to US$88 a barrel after members of the producer group agreed to slash as much as 2 million barrels a day from current output limits. Meanwhile, Russia may impose a temporary production cut in response to efforts by the U.S. and others to cap the price of Russian oil, Deputy Prime Minister Alexander Novak said. He reiterated that the nation would not sell oil to countries that capped prices.

OPEC’s move drew criticism from the U.S. which has been battling energy-driven inflation. White House Press Secretary Karine Jean-Pierre said the cut aligns the group with Russia, while President Joe Biden called it “unnecessary.” The White House also indicated it could release more oil from the Strategic Petroleum Reserve to alleviate rising prices.

“All in all this was supposed to be an event that reduced volatility and added support to the market,” said Rebecca Babin, a senior energy trader at CIBC Private Wealth Management. “However, I think the end result here may be more volatility and uncertainty in the market.” 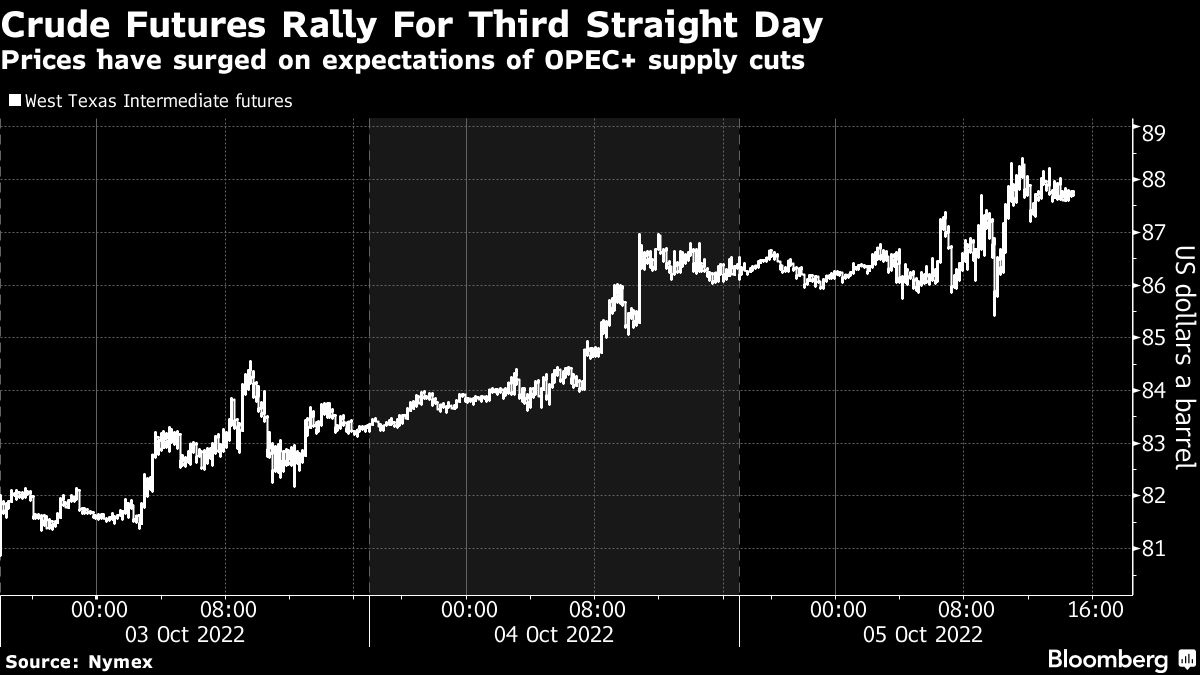 A 2 million-barrel OPEC+ production cut reflects the extent to which the group is concerned about the outlook for energy demand in the face of rapidly tightening monetary policies. The U.S. benchmark recently capped its first quarterly loss in two years after giving up all the gains made following Russia’s late-February invasion of Ukraine.

But with several countries already pumping well below their quotas, the real-world impact of the cuts will likely be around 1 million to 1.1 million barrels a day, according to Saudi Arabia’s energy minister.

“Despite macro concerns, oil consumption has proved resilient so far and will increase more than seasonally into winter as the global gas shortage pushed demand toward oil, the cheapest source of energy currently,” said Damien Courvalin, Goldman Sachs’ head of energy research.

Meanwhile, markets for refined products are surging. Diesel in Europe is in its biggest backwardation since July, indicating tight supply, while gasoline and heating oil in the U.S. have also jumped.