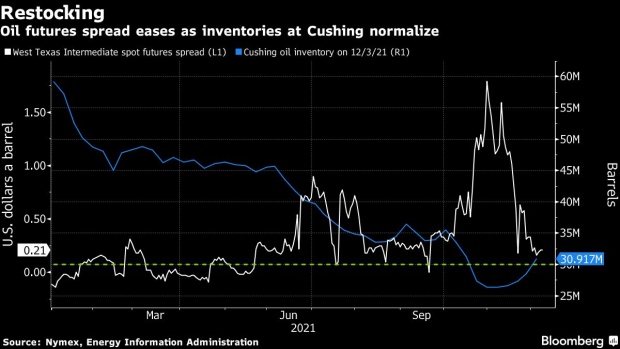 (Bloomberg) -- After weeks of fears that crude inventories at Cushing, Oklahoma would slide to operational lows, inventories edged back above 30 million barrels at the delivery point for benchmark U.S. oil futures.

The psychologically important level provided added cushion to the spread between West Texas Intermediate crude for delivery immediately versus the contract for delivery a month later. The spread has seen a huge spike in volatility, surging to as much as $1.88 a barrel last month as stockpiles at Cushing plummeted when traders sent more barrels to the Gulf Coast for exports instead.

Inventories at the storage hub have risen for four straight weeks now with last week being the biggest increase since February. This has helped the prompt spread steady around 25 cents a barrel.