Oil, bolstered by a broad-based market rally, rose for a second day as US crude and gasoline stockpiles showed signs of continuing decline ahead of the summer driving season.

West Texas Intermediate futures settled above US$114 a barrel for the first time in 10 days as equities rallied and the dollar fell. Global crude markets continue to tighten due to a combination of rebounding demand and disrupted Russian supplies. US gasoline stockpiles declined to the lowest seasonal level since 2014, according to government data on Wednesday.

“The realization is setting in that supplies are going to continue to contract,” said Dennis Kissler, senior vice president of trading at BOK Financial. “That’s what’s pushing crude higher.”

Meanwhile on Thursday, the UK government announced it will impose a windfall tax on energy firm profits. The 25 per cent tax on oil and gas firms will raise about US$6.3 billion to finance grants to the poorest households in the UK. 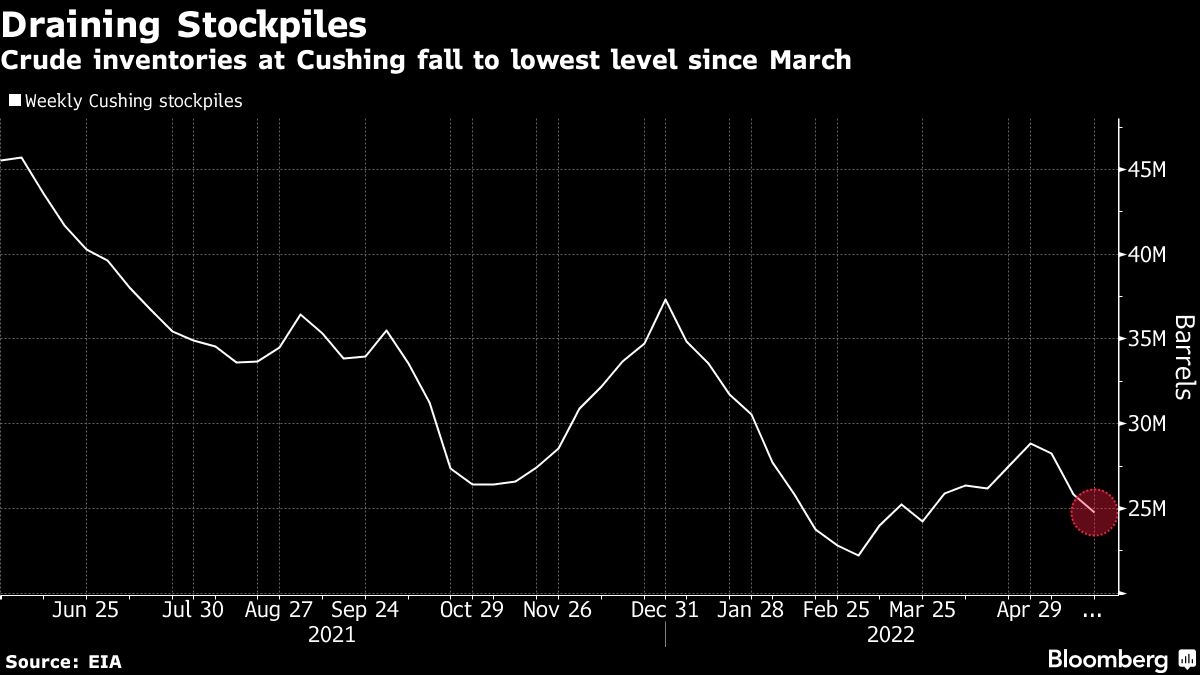 American retail gasoline prices have repeatedly broken records in the run-up to the driving season that starts this weekend. However, motor fuel demand is showing some signs of stress, tumbling on a rolling four-week basis, data released Wednesday by the Energy Information Administration show.

Crude has seen a tumultuous period of trading since the end of February after Russia’s invasion of Ukraine upended trade flows and fanned inflation, while COVID-19 outbreaks in China have damped demand in the biggest importer. Oil markets are balanced but companies need to invest more in production to meet rising demand and prevent even higher volatility, according to Saudi Aramco.

Chinese Premier Li Keqiang said the nation’s economy is in some respects faring worse than in 2020 when the pandemic first emerged, urging efforts to reduce a soaring unemployment rate. Strict lockdowns to curb the spread of the virus have strained economic activity and sapped fuel demand.

Despite signs of a slowdown in China, technical market indicators are flashing signs of extreme tightness. The gap between prices for oil available immediately versus those a month later widened to almost US$3 a barrel for WTI. International benchmark Brent’s equivalent spread also strengthened, climbing to as much as US$3.20 on Thursday, the highest since late March.