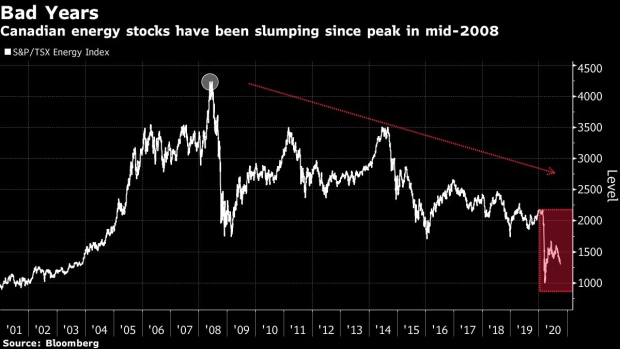 Gibson Energy Inc. oil storage tanks are seen in Hardisty, Alberta, Canada, on Tuesday, April 21, 2020. Since the start of the year, oil prices have plunged after the compounding impacts of the coronavirus and a breakdown in the original OPEC+ agreement. Photographer: Jason Franson/Bloomberg , Divya Balji and Michael Bellusci

(Bloomberg) -- Canadian oil and gas stocks never really recovered from the global financial crisis. They had a bounce in 2009 as the economy improved, but a surge in U.S. shale production sparked another crash in 2014.

The bullish case for Alberta’s oil-sands companies is that they own a unique, long-lasting resource in a politically stable country. Many oil-sands projects may come with eye-watering price tags -- witness the C$17 billion ($12.8 billion) cost of the Fort Hills mine owned by Suncor Energy Inc. and its partners. Once built, however, companies have decades of oil to extract.

But investors aren’t buying the story that Big Oil has sound fundamentals in Canada. The iShares S&P/TSX Capped Energy Index ETF has lost 56% this year after including dividends. That flatters the performance of some of its biggest names: Husky Energy Inc. plunged 72%, Cenovus Energy Inc. fell 64% and Suncor dropped 63%.

Imperial Oil Ltd., which is controlled by ExxonMobil Corp., is down 55%. Canadian Natural Resources Ltd. is a bright spot, having fallen a mere 50%. Those five companies combined lost about C$100 billion in market value in 2020.

“Joe Generalist” -- or broad-based investors -- may have wanted to reduce their energy weighting and would likely look at an underperforming big-cap stock such as Suncor, Ninepoint Partners LP’s Eric Nuttall said Friday in a phone interview.

Those large energy firms have been cutting jobs, with Suncor telling employees Friday that 2,000 will be laid off during the next year and a half.

A lack of demand for gasoline has also been hurting investor sentiment of integrated oil and gas firms. Ollenberger said that should improve as refined-product demand increases in time through fewer pandemic lockdowns and a potential Covid-19 vaccine.

Refining margins and profits have supported earnings from major producers in the past, but the “demand destruction dynamic” for transportation fuel during the pandemic has been a huge headwind, said Josh Young, chief investment officer at Houston-based Bison Interests LLC.

In the meantime, it has been hunker-down mode for Calgary:

Tackling debt will be important this year.

“Within the Canadian majors, we believe the pace of deleveraging will be the key to relative outperformance,” Credit Suisse analyst Manav Gupta said in a Sept. 7 report.

It’s unlikely Imperial Oil or Suncor will be able to lower net debt in the second half of the year, he added, but both will be able to fully cover their dividends by the fourth quarter.

There’s some debate about Cenovus’s balance sheet. While Gupta sees the company cutting net debt by C$500 million to C$600 million in the second half, JPMorgan analyst Phil Gresh just downgraded the stock to a sell-equivalent rating, anticipating it will be tough for Cenovus to cut borrowing given weak oil prices.